Previous Next
Dutch gold and dirt

I don’t know why it was

The 500 EXC went went through its first big maintenance in late 2019 after the Prometheus 19 expedition. The bike has since been shipped to The Netherlands in January, but I didn’t get around to having it inspected, registered, insured and plated until just two weeks ago. The reason of course being that there were no expeditions to ride on, thanks to the little prank our Chinese friends pulled o the world. And as much as I love the Netherlands, it’s not exactly a paradise for any two wheeled excitement outside of road cycling. But there is light at the end of the tunnel and I figured it was time to scratch the registration off the to-do list.

A huge thanks goes to Bas at HyperPro, who has patiently helped me out with the intricacies of the local bureaucracy and vehicle registration, and furthermore storing the bike and giving me a place in which to work on it. He’s the same dude who rode on the Sibirsky Extreme expedition with Walter Colebatch a few years back, and also rebuilt the forks on my 500. So my KTM stood out like a sore thumb from all the airheads at the workshop. But the gang is super friendly and helpful, and I’d be honored to spill oil and sling dirt with the guys any day of the week. A big thanks also goes to Vladimir, who lent me the tail section from his bike to make mine road legal for the inspection. 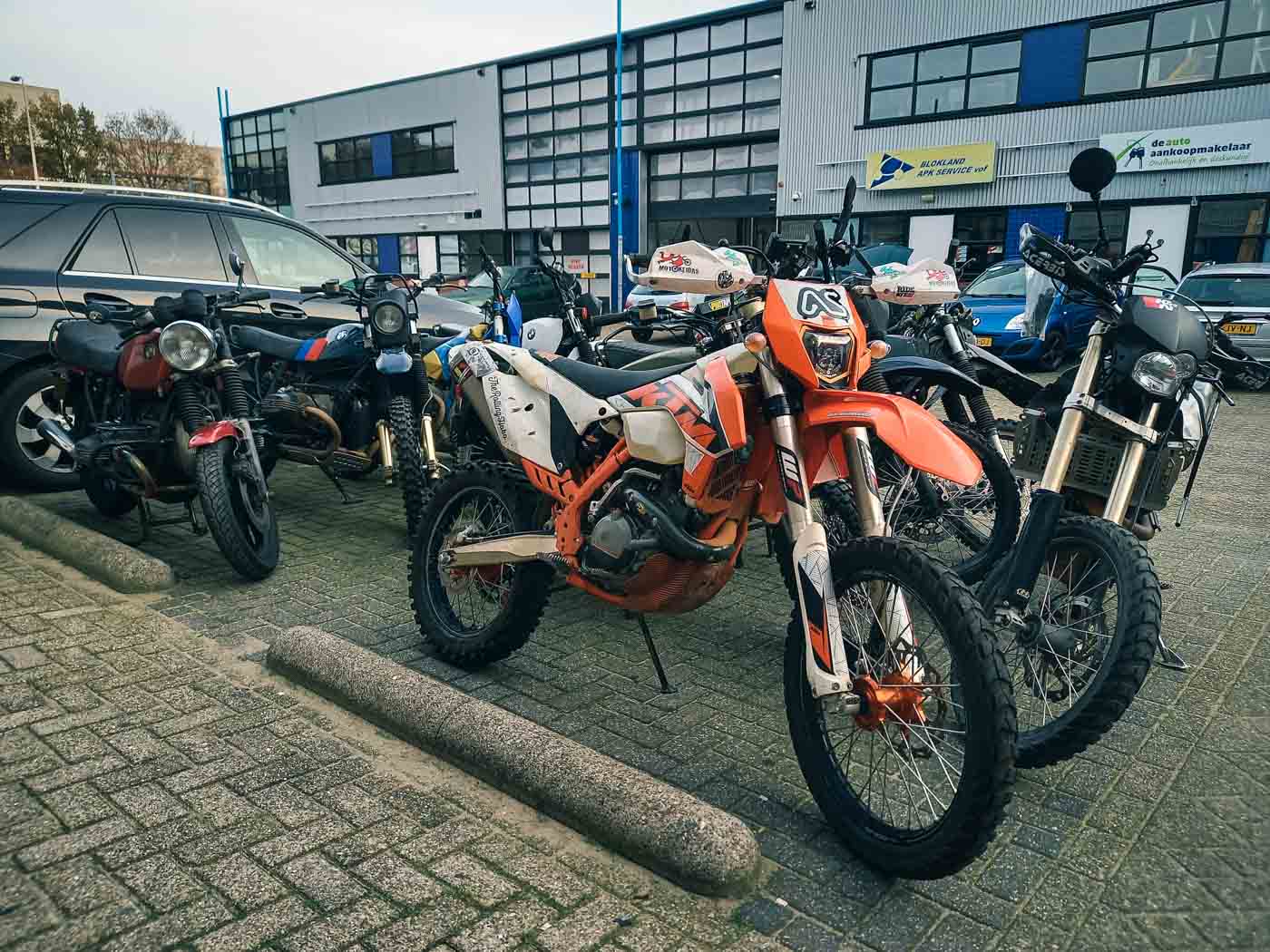 The import inspection ended up being quick, easy and painless, so many thanks to the helpful and friendly staff at RDW, the local vehicle registration department. Sorting out the mandatory taxes was an online deal and went without issues, which then enabled insuring the bike. Getting the insurance right took few telephone calls and emails but everything got sorted eventually and the final step was to have the plate made. After a somewhat quick process, albeit with several phases and involved parties, I had the fresh plate in my hand and rushed off to Bas’ to bolt it on the bike. While I was there, I also needed to sort out some small kinks and slap on a new pair of Metzeler Six Days Extreme’s and then ride the bike to its home in Amsterdam. So the bike has been officially ready to ride since Saturday a week ago. But the question is where to ride it? My Dutch moto friends all recommended keeping an eye out for Action Planets’ moto offroad days, which is a monthly track day on their private offroad tracks. As far as I know, it is also pretty much the only riding opportunity nearby. All dates were sold out, but luckily Bas tipped me off about an extra day last Sunday, to which I managed to get a ticket.

Sunday morning broke cold and overcast, but the skies were clear of rain and the ground was dry. Once I arrived at Action Planet, I first received a briefing of the tracks and general instructions and rules. The friendly staff member told that the track had never been as wet as now and that there was an easy route, which was very wet, and a harder route which was more wet. I didn’t waste any time getting onto the track and decided to warm up on the easy tracks. And sure enough there was plenty of water, with the puddles still being frozen at the surface after the cold night. The track itself was very twisty, very wet and partially muddy and it contained hardly any fast sections. As it had been 16 months since I had been on the bike, I was initially pretty out of touch; the corners seemed to get in my face one after another, and I had a death grip on the bars. The bike felt incredibly powerful after the top end rebuild, so throttle control was twitchy and everything seemed a little unfamiliar. Even my jersey was way too tight in the arms after weeks of hitting the gym, and cut off circulation in the forearms.

I swung back to the pit area after the first few laps and took off the oppressive jersey and circulation returned to my forearms and the blood filled muscles started to loosen up. I switched to my Adventure Spec Aqua Pac Jacket which was the appropriate layer anyhow, because the day was a wet & wild mudfest. 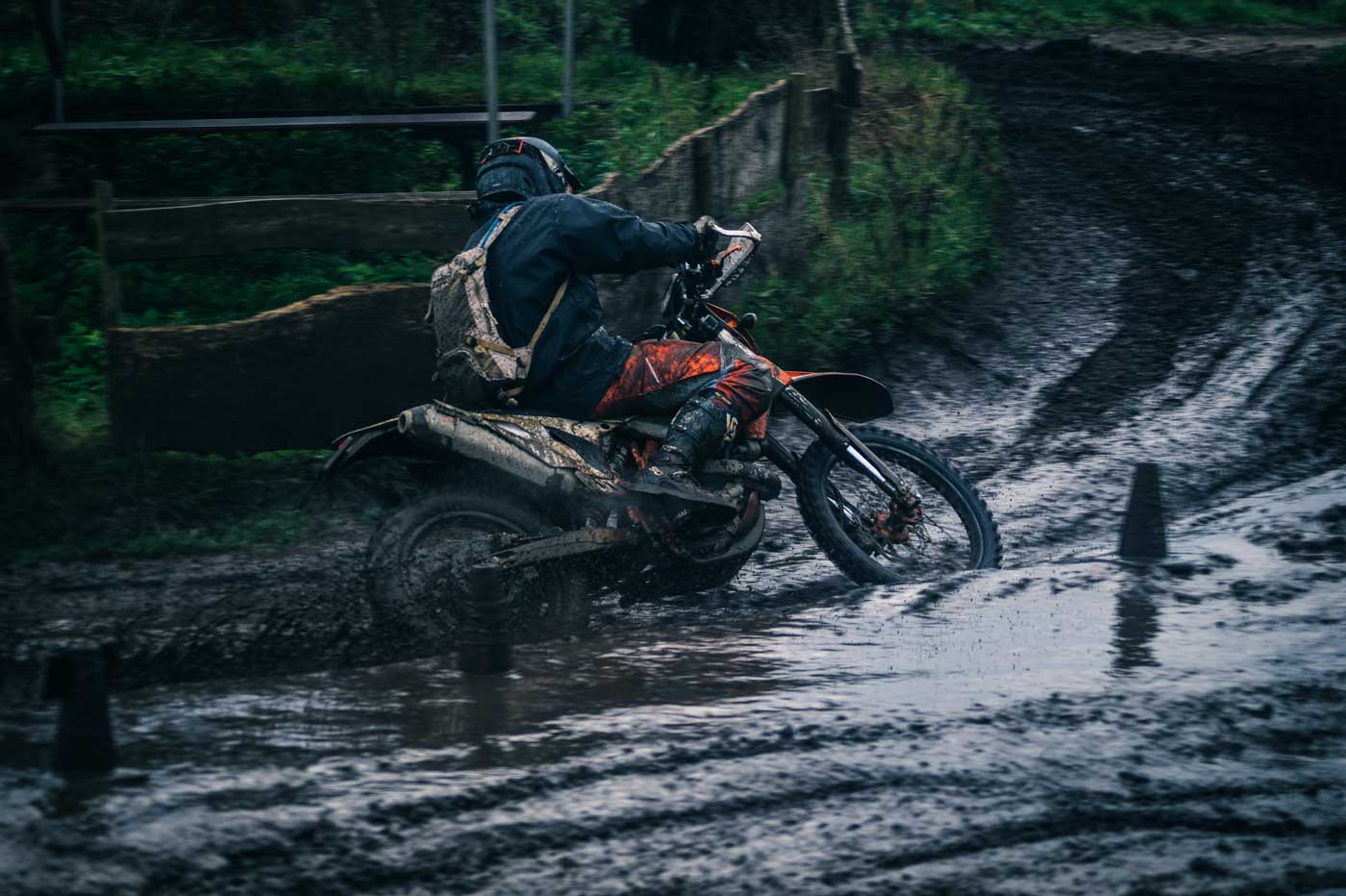 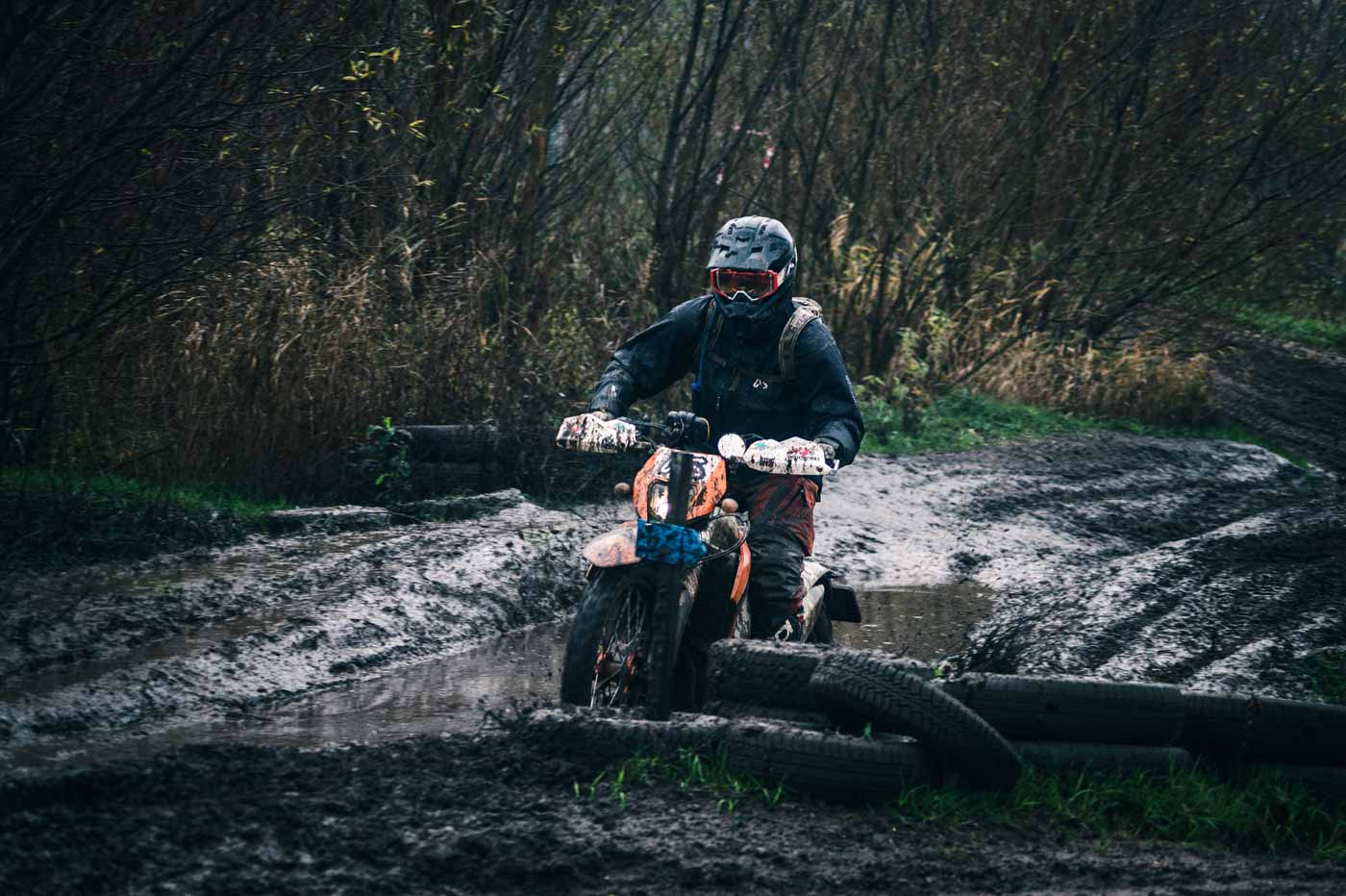 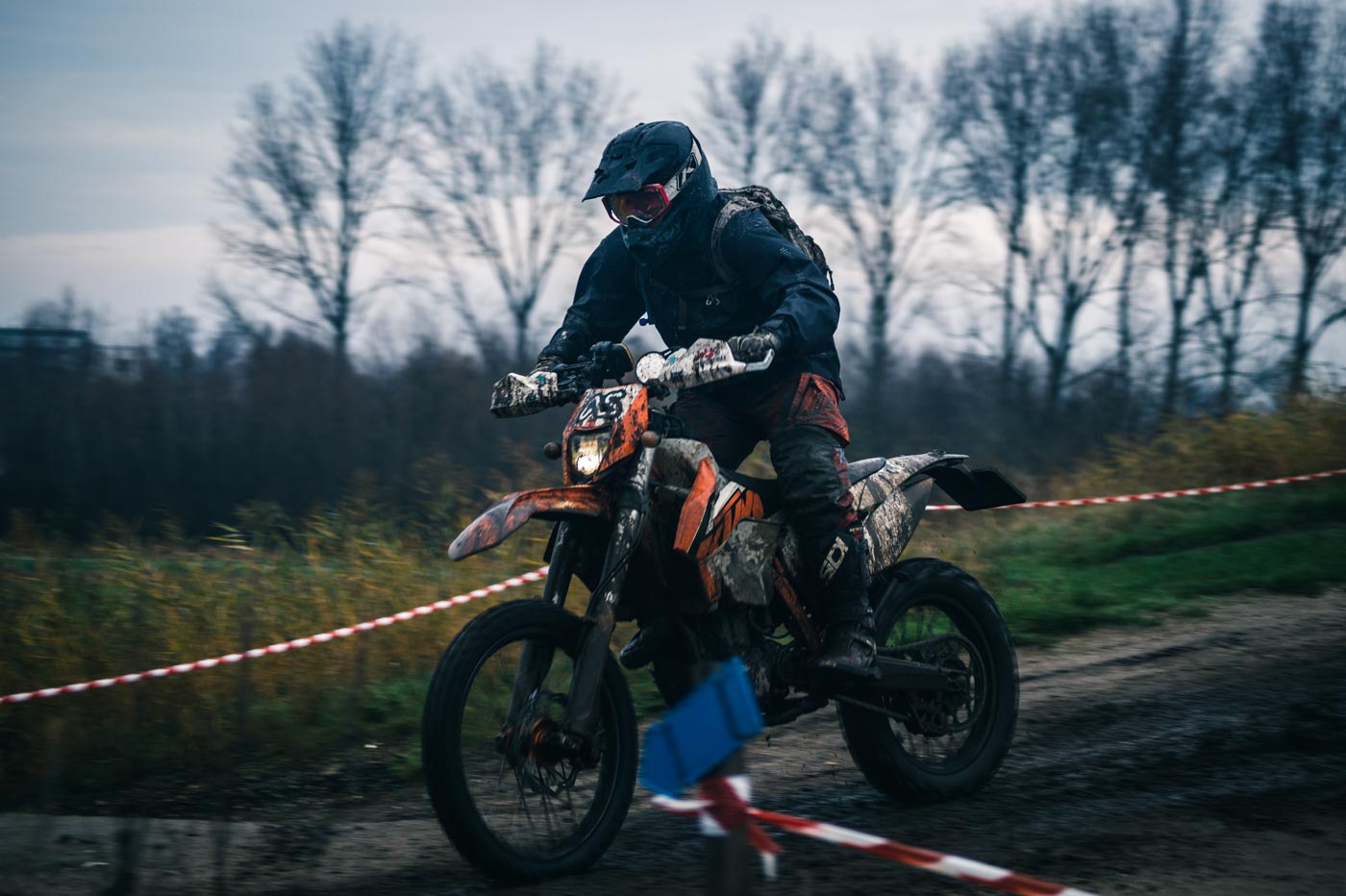 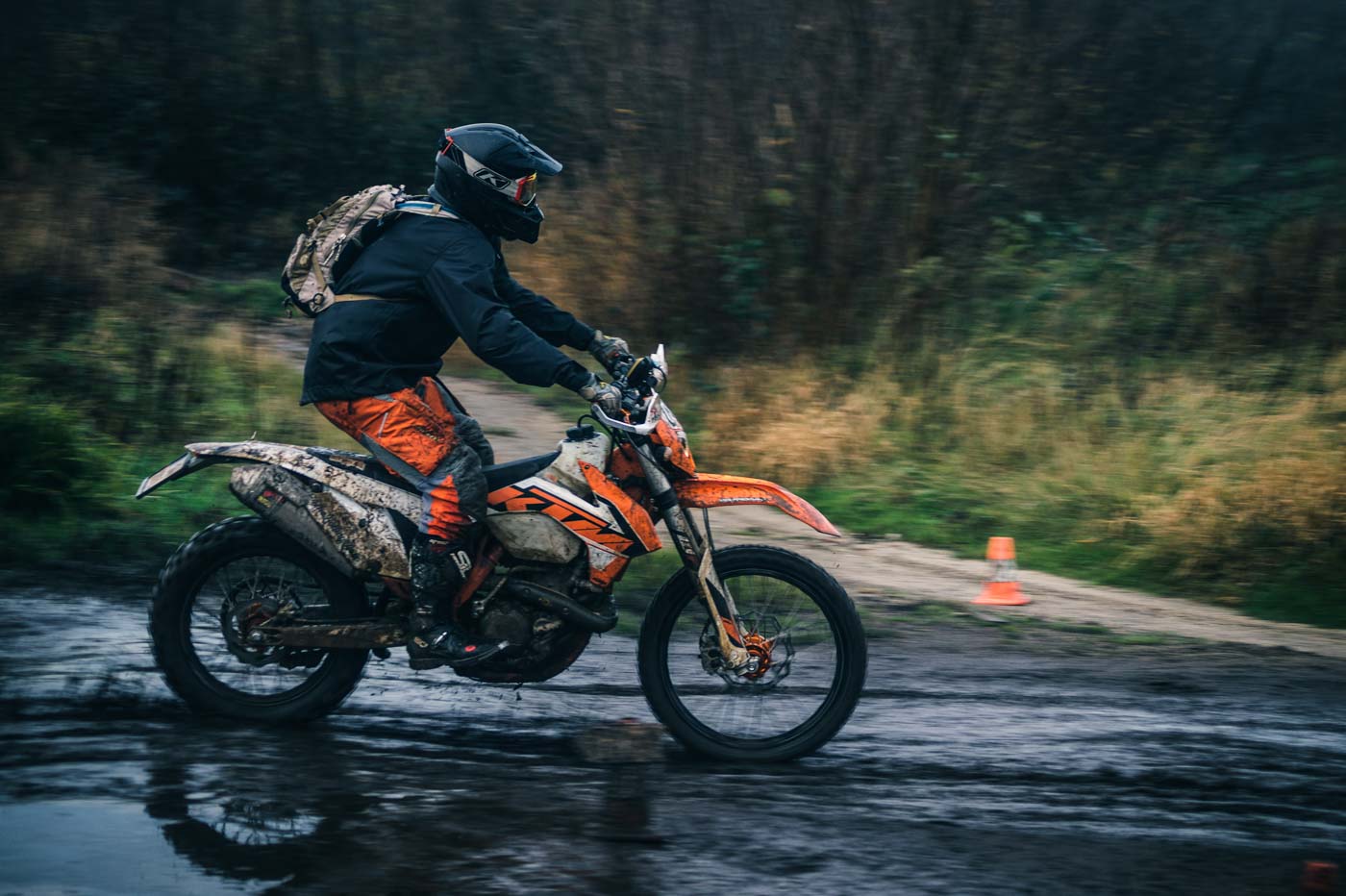 Back on the track, the riding got progressively more familiar and the pace quickened. Despite all the water, mud and clay, traction was good and even the huge puddles in forested areas of the track had hard bottoms, so there was no risk of getting stuck. It was comforting to see, or feel rather, that muscle memory and intuitive body movement increased lap after lap, until I was standing confident on the bike once again. It seemed as if the deterioration of over a year off the bike evaporated in mere in hours, and the 500 felt like natural extension of myself and responded predictably without hesitation. Having said that, the bike had definitely perked up since the piston change during the service. The increase in power was clearly felt, so I guess it had been high time for the top end rebuild. The forks were working very well after Bas’ rebuild, and we plan to overhaul the rear shock too with a HyperPro progressive spring.

There is a thin line between confidence and reckless over-confidence, and after two and a half hours of intermittent laps and rest I was approaching the wrong end of the spectrum. It was hard not to “do one more set”, but in a moment of uncharacteristic judgement I swung to the washing area instead. After hosing down the bike and my boots, I rode to the exit gate and recognized one of the photographers I’d seen lurking at the side of the track. I stopped to have a chat with him and he agreed to send me a set of pics for a very reasonable price. So many thanks to Rick from Jax’s Racing Garage!