The ultralight expedition build of my KTM 500 EXC was a big win for enduro expeditions, I was curious whether the design fundamentals might work for a light rally bike too.

My interest in adventure riding has been waning during the last two years. I’m not sure whether it’s due to the Covid bullshit, the lack of rides in exotic locations or just the fact that riding an unloaded 500 EXC is just so much better than riding with panniers. Furthermore, during my exile in Transylvania all my mates were into rally instead of enduro, so I caved into the peer pressure and registered in to the Romanian Baja 555 rally and started rebuilding the bike.

Firstly, credit is due to Jon from KIT 690; he’s one of the top rally guys from Romania, and was a mentor, designer and fabricator in the project. Without his insights, experience and input this build would have been very different, and not in a good way.

I wanted to keep the setup as light as possible and easily convertible back to enduro. So I decided to use the Adventure Spec Universal Navigation Clamps as the base for a handlebar mounted navigation setup. The other option would have been a full rally tower, but the fact that it doesn’t move with the handlebar creeps me out. A rally tower is also heavier, more complicated and significantly more expensive than the handlebar mounted ultralight solution. Furthermore, I’m very happy with the performance of the Enduro-Tech DUAL.5 LED light, which replaces the OEM light, so I didn’t need to add extra lighting into the designs. 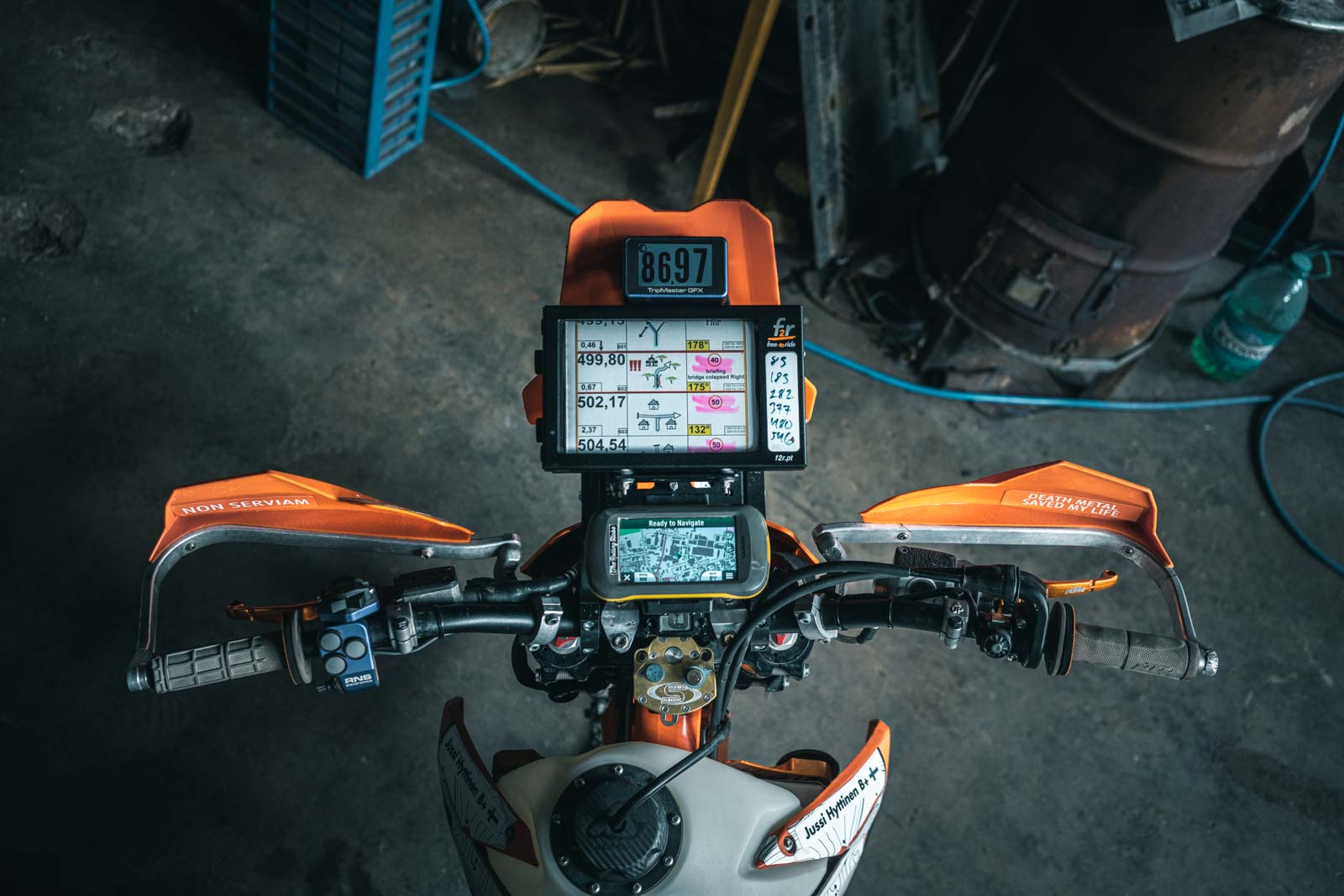 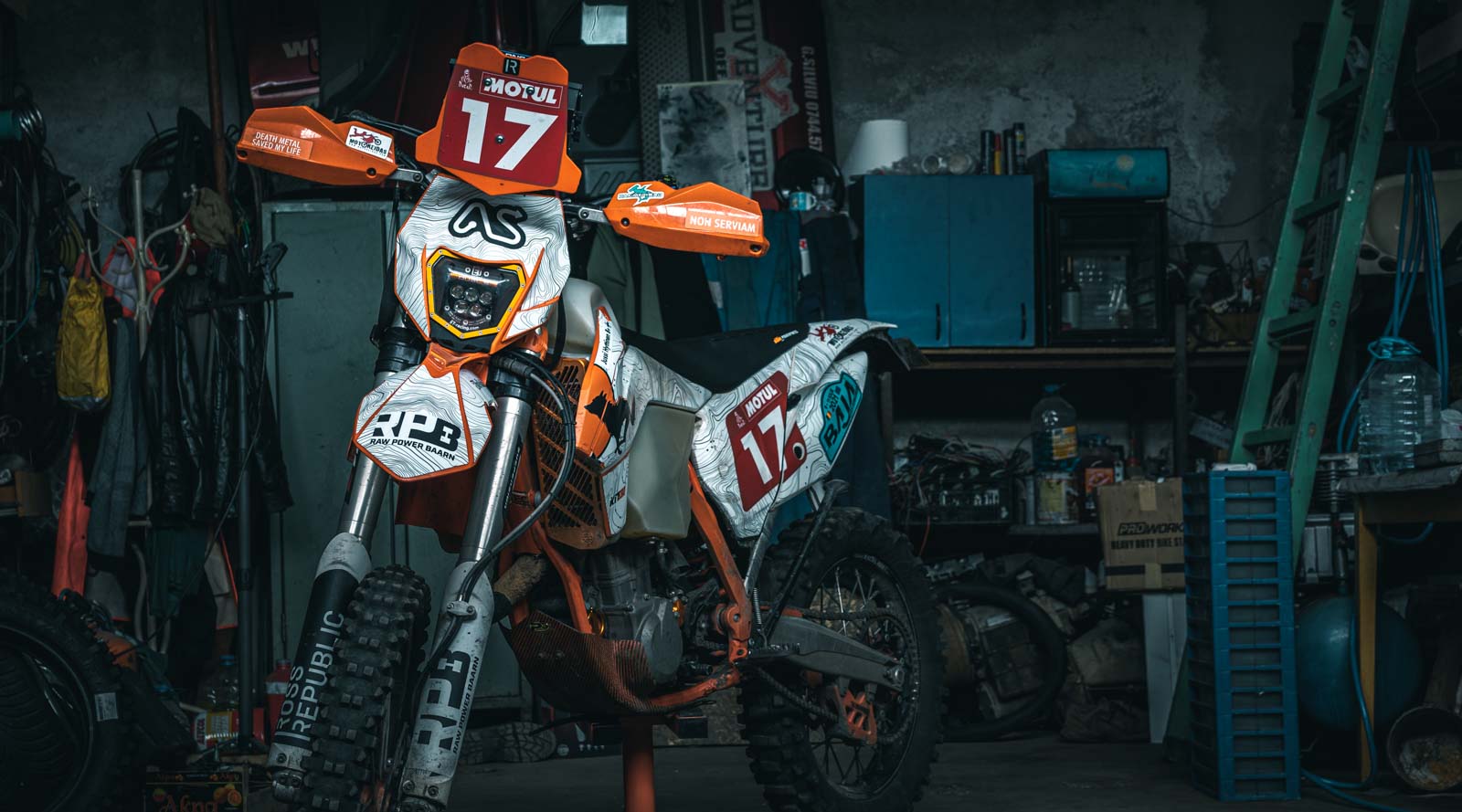 There were no significant changes to the current ultralight 500 EXC setup. I basically just removed the indicators, pannier D-rings and silencer heat shield. The biggest task was designing and producing a custom navigation plate for the AS clamps, as the standard plate didn’t have enough real estate for a trip master, road book holder and a Garmin Montana. Luckily Jon from KIT 690 helped out with the design of the plate and before long we had a laser cut and bent piece of aluminium powder coated black and ready to install.

I went with the F2R RB850 road book holder, which fit perfectly on the custom navigation plate. The only necessary modification was to drill and tap a hole on the front brake caliper for the wheel speed sensor, and modify the cable holder on the fork protector to run the sensor cable to the cockpit. 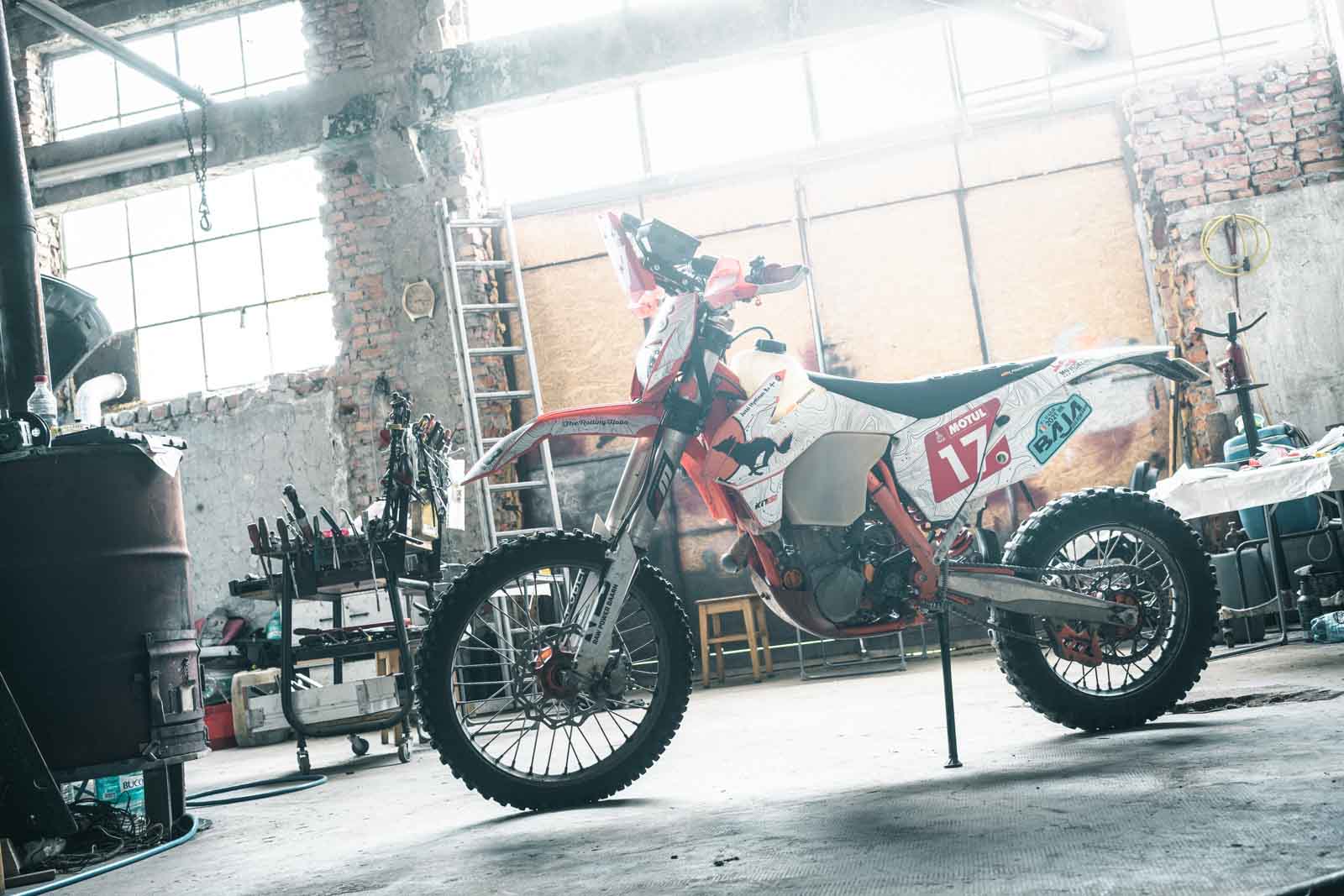 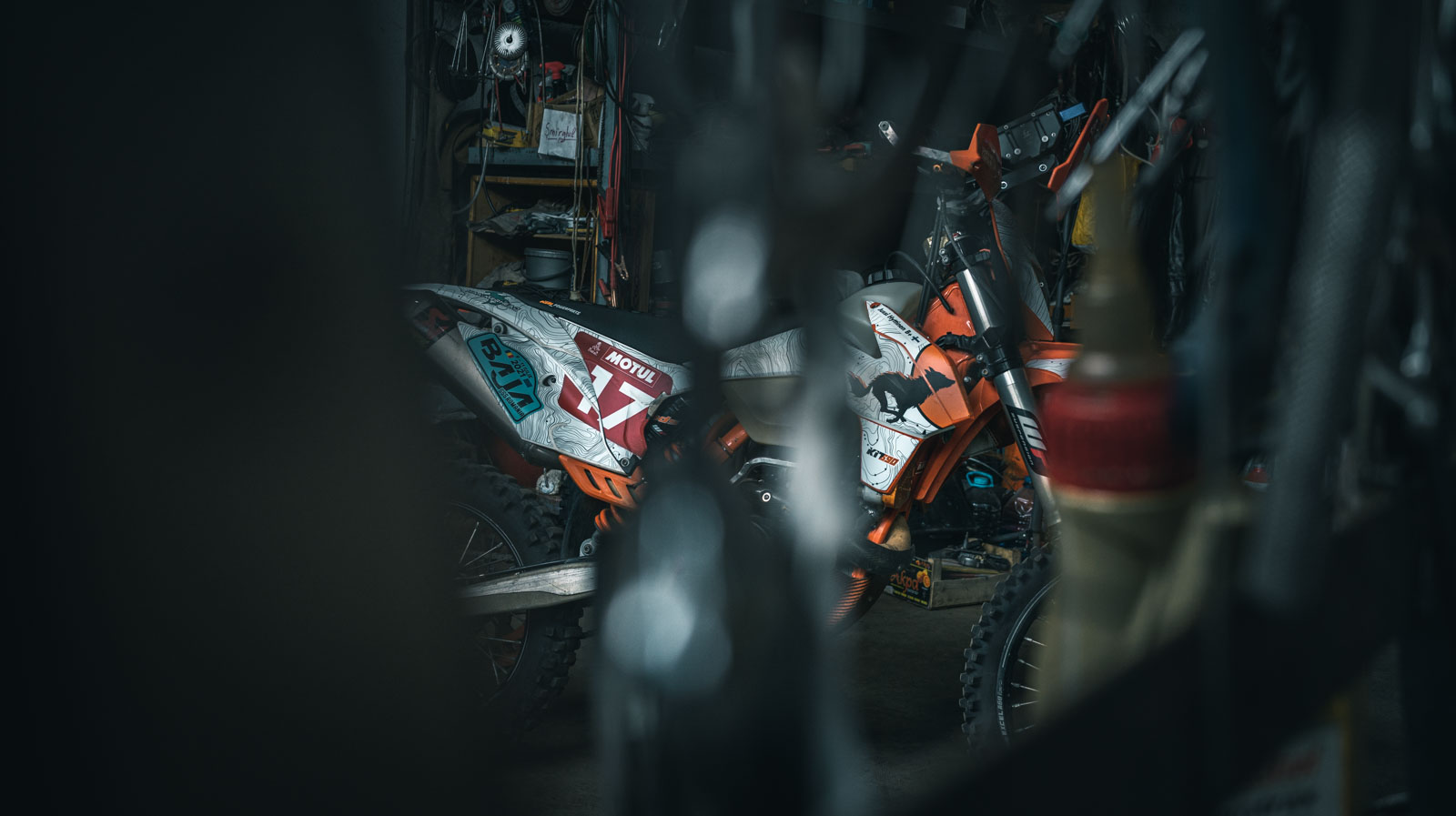 To keep things light and simple I went with the RNS TripMaster GFX v2 Pro trip master. It features both a wheel sensor and GPS speed, along with the trip and bearing, so everything necessary. Instead of using the road book controller which was in the F2R kit, I installed an RNS three button MultiSwitch 3, with an integrated road book controller toggle switch. To keep things simple, I added an RNS MultiSwitch CEV Light Switch Clamp on MultiSwitch 3 to hold a CEV Light Switch for lights, horn and kill switch. I’m very pleased with the tidy setup.

My trusty Montana was installed, with it’s 12VDC cradle, to the bottom of the plate and the bolt on parts were installed. The electrical work was simple; I ran a single line for powering all navigation equipment and a single switch ghetto mounted on the wire stack. I also removed the hidden kill switch, as it became very hard to reach under the navigation plate, and served no purpose in racing conditions. The build was finalised with Jon’s KIT 690 team graphics, which I’m proud to represent. 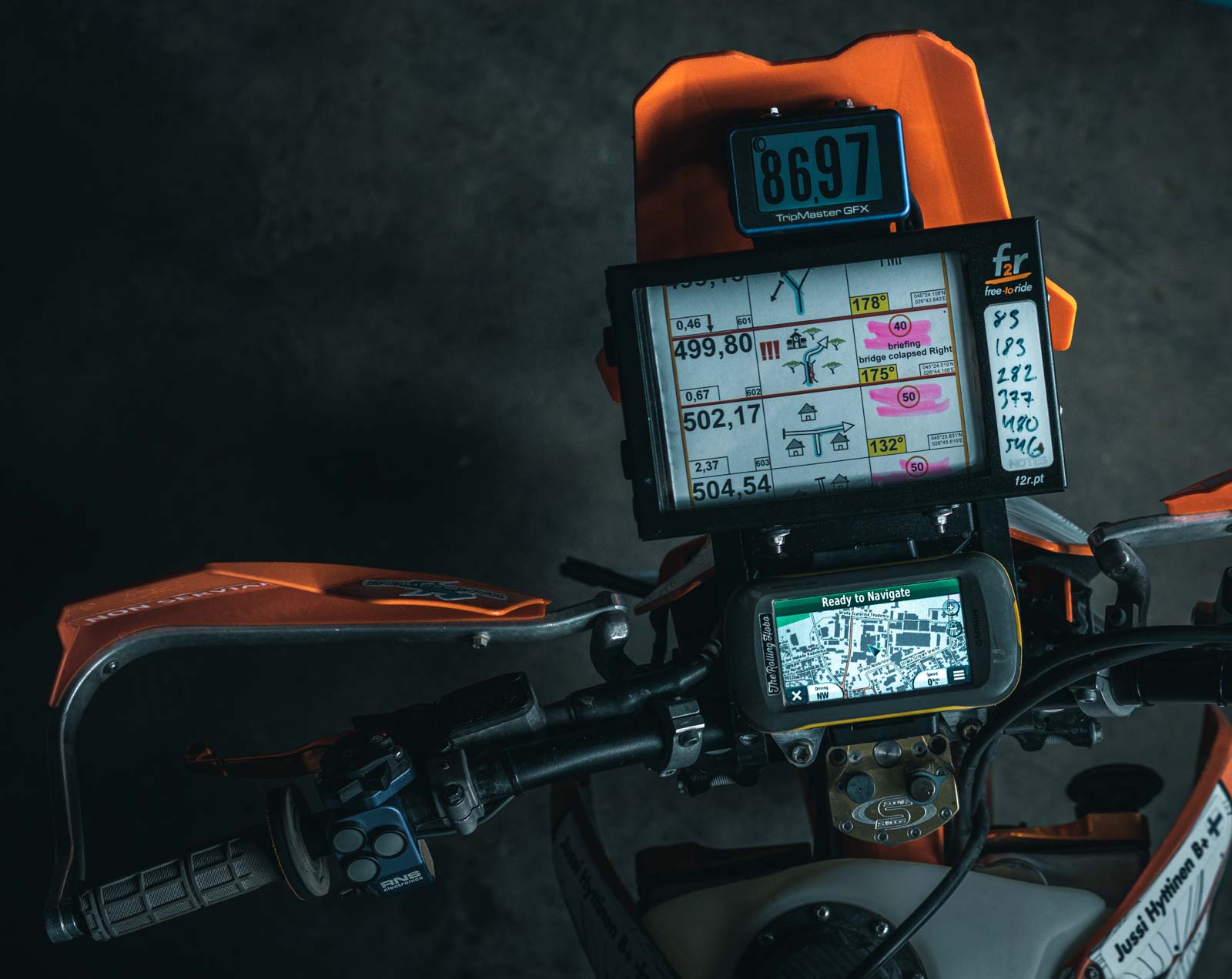 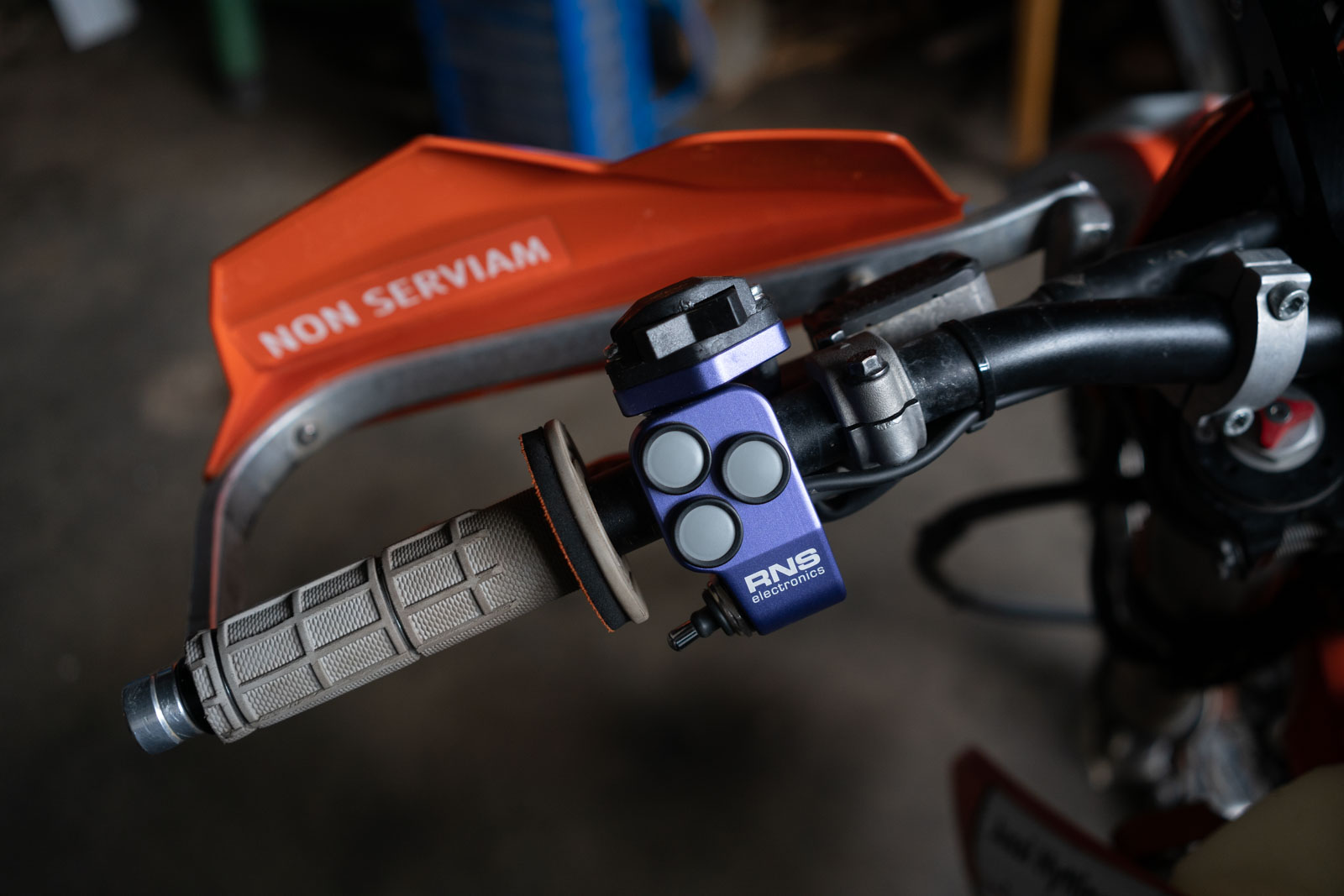 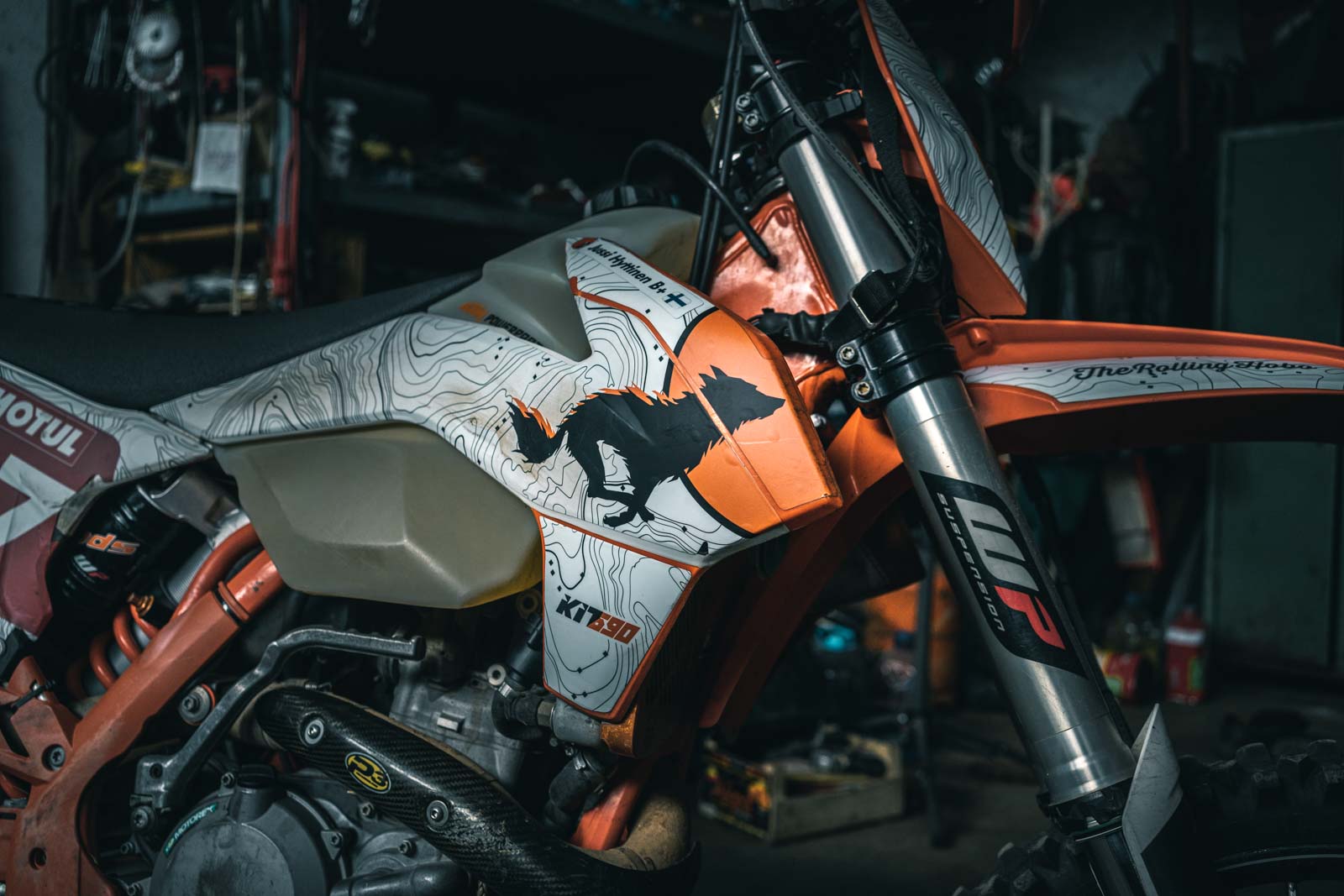 I had no time for testing the setup before the first race, and the shake down test was performed during the qualification of Romanian Baja 555. I was expecting to feel more of an impact of the weight of the equipment, as its connection point is much higher than the tower setup. I was pleasantly surprised to feel that the weight was definitely there, but it actually made the handlebar feel faster and twitchier, which I’m used to, coming from a mountain biking background. Either way, the weight was noticeable but without a lot of impact on the handling. 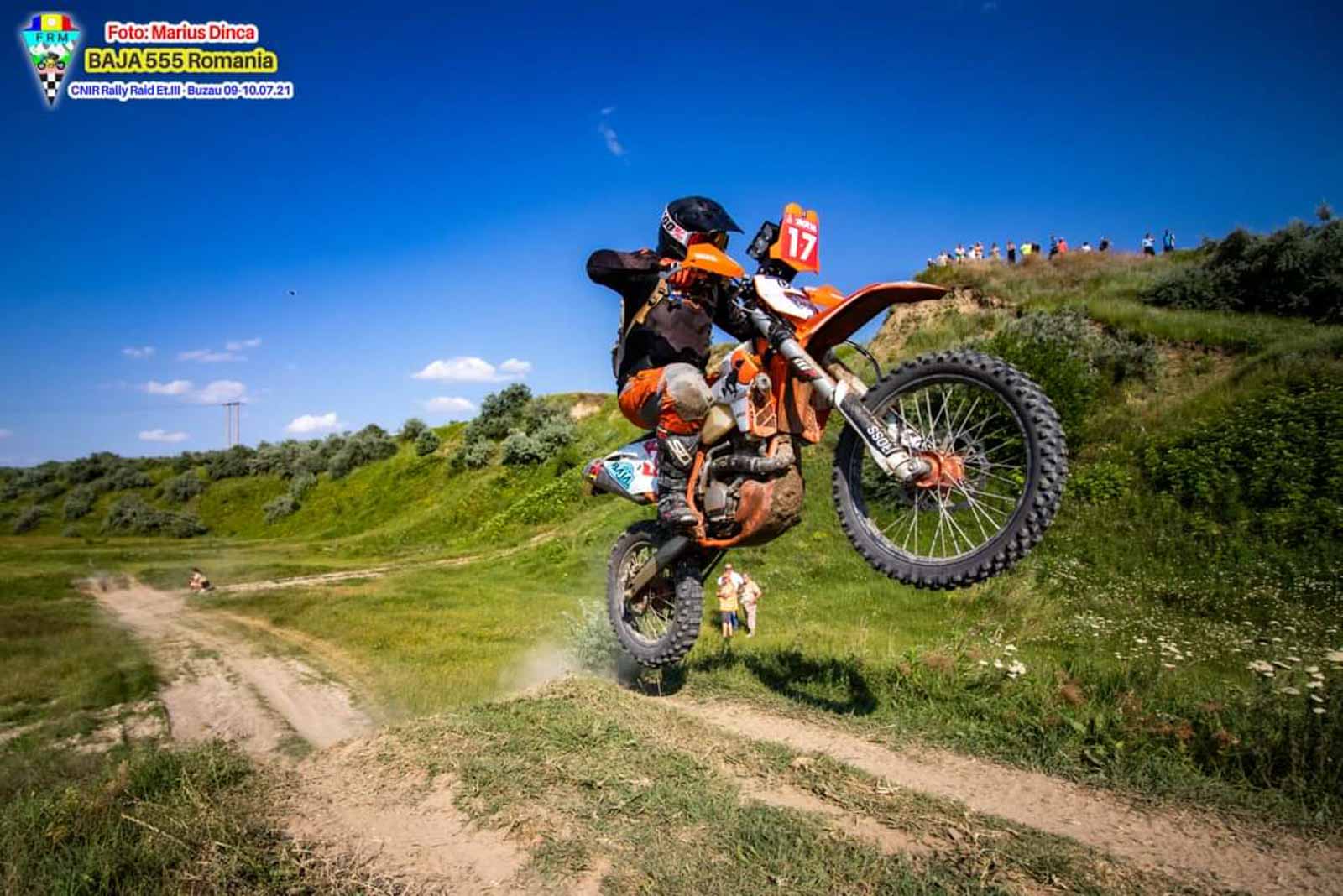 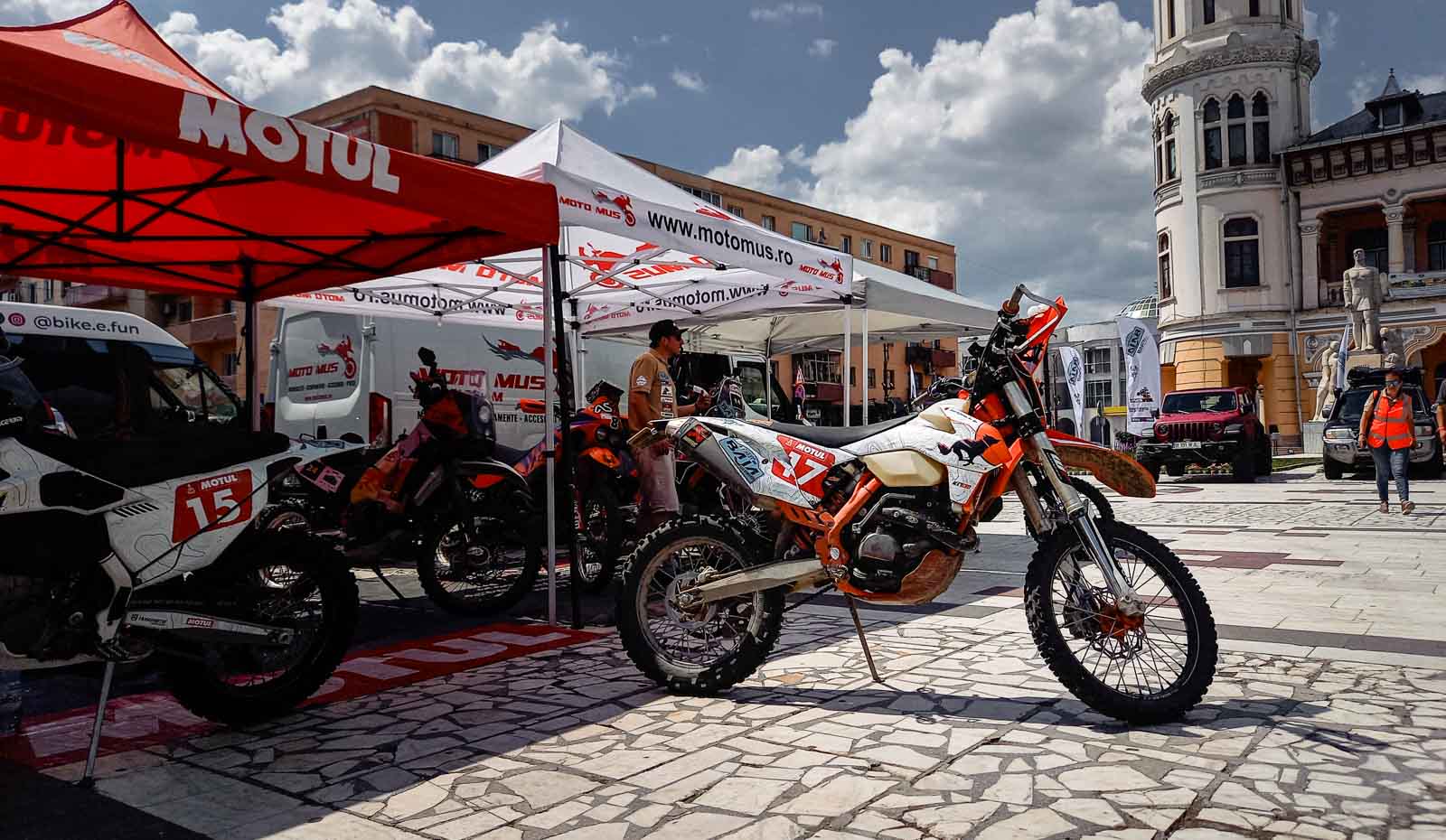 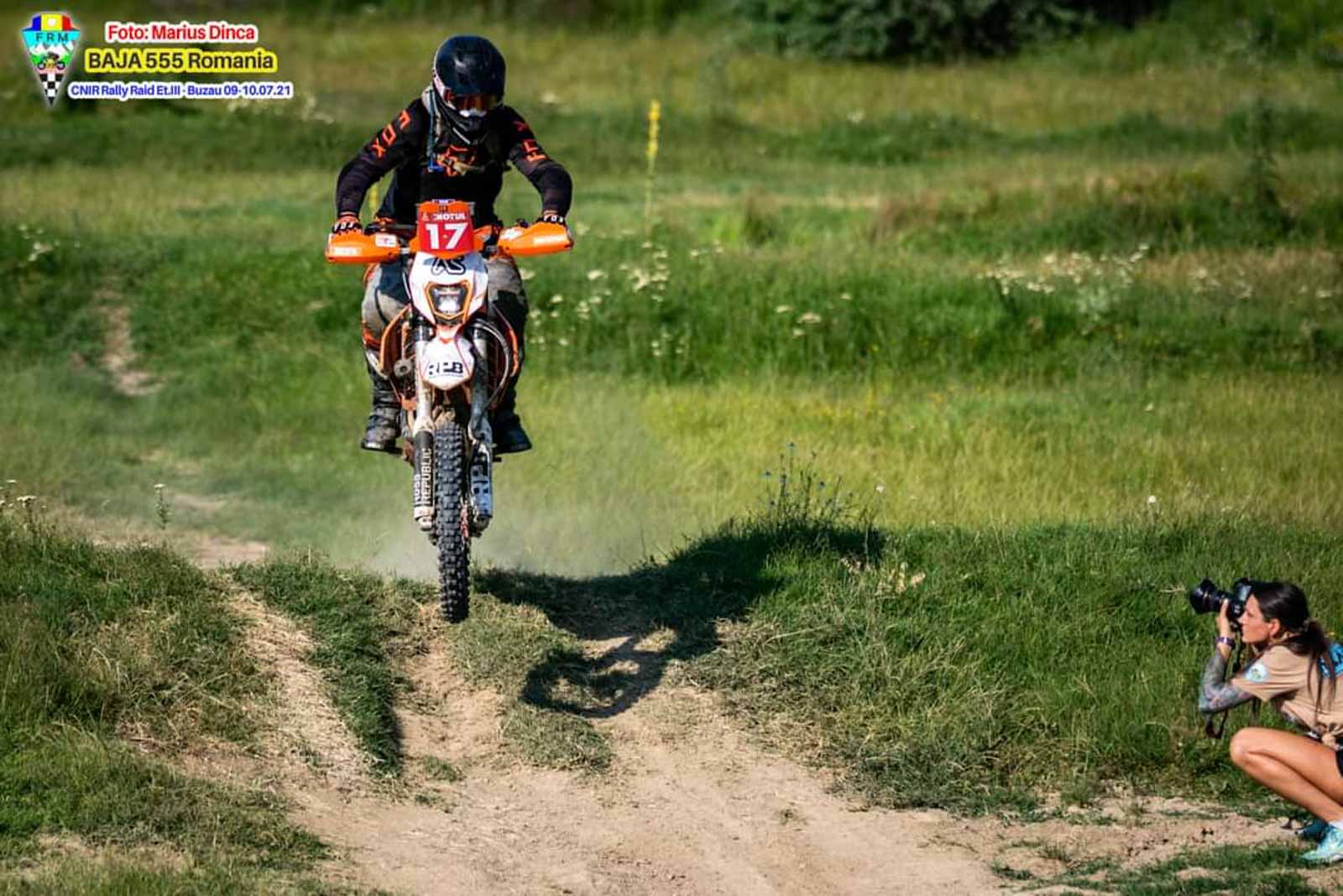 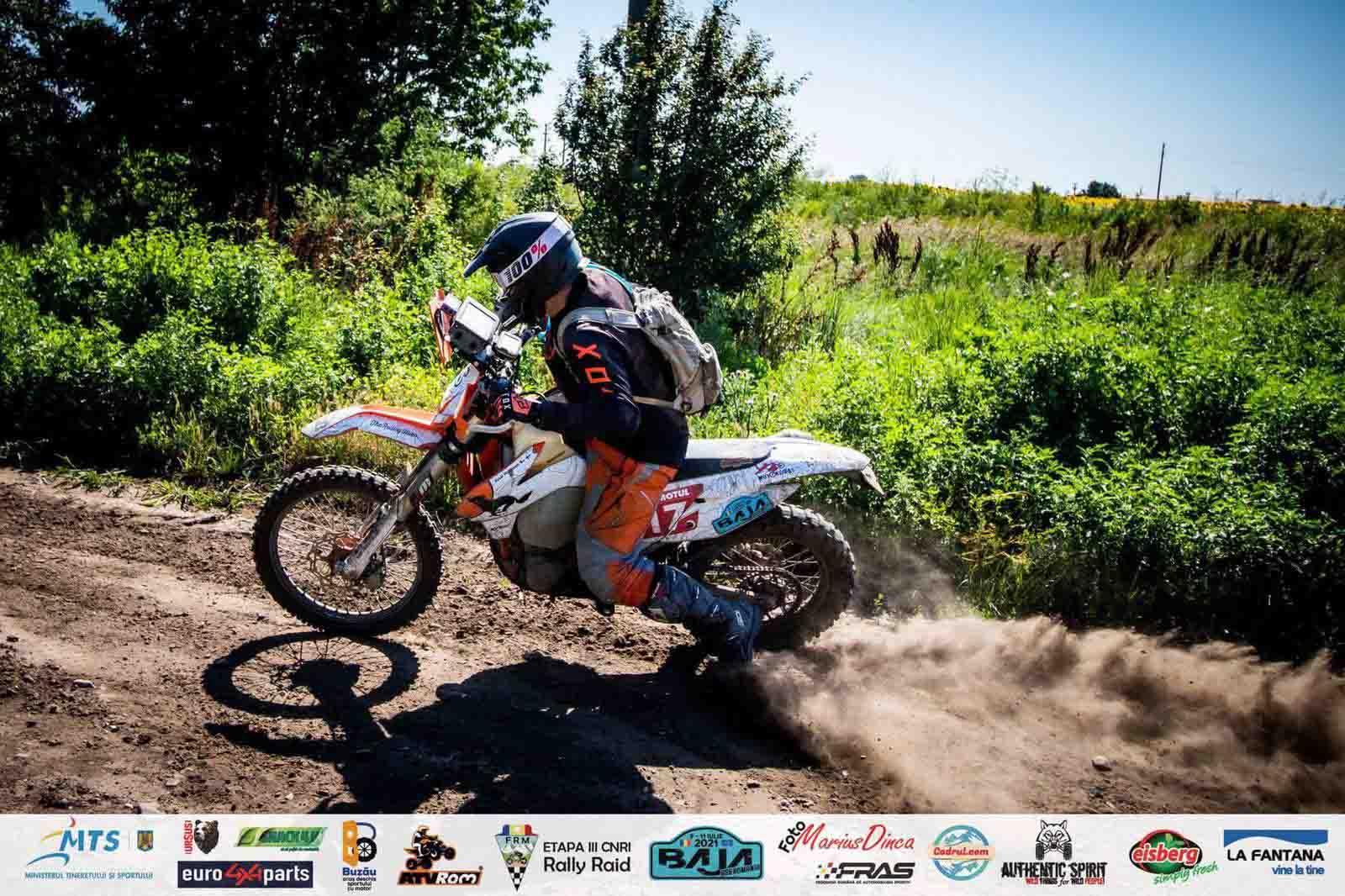 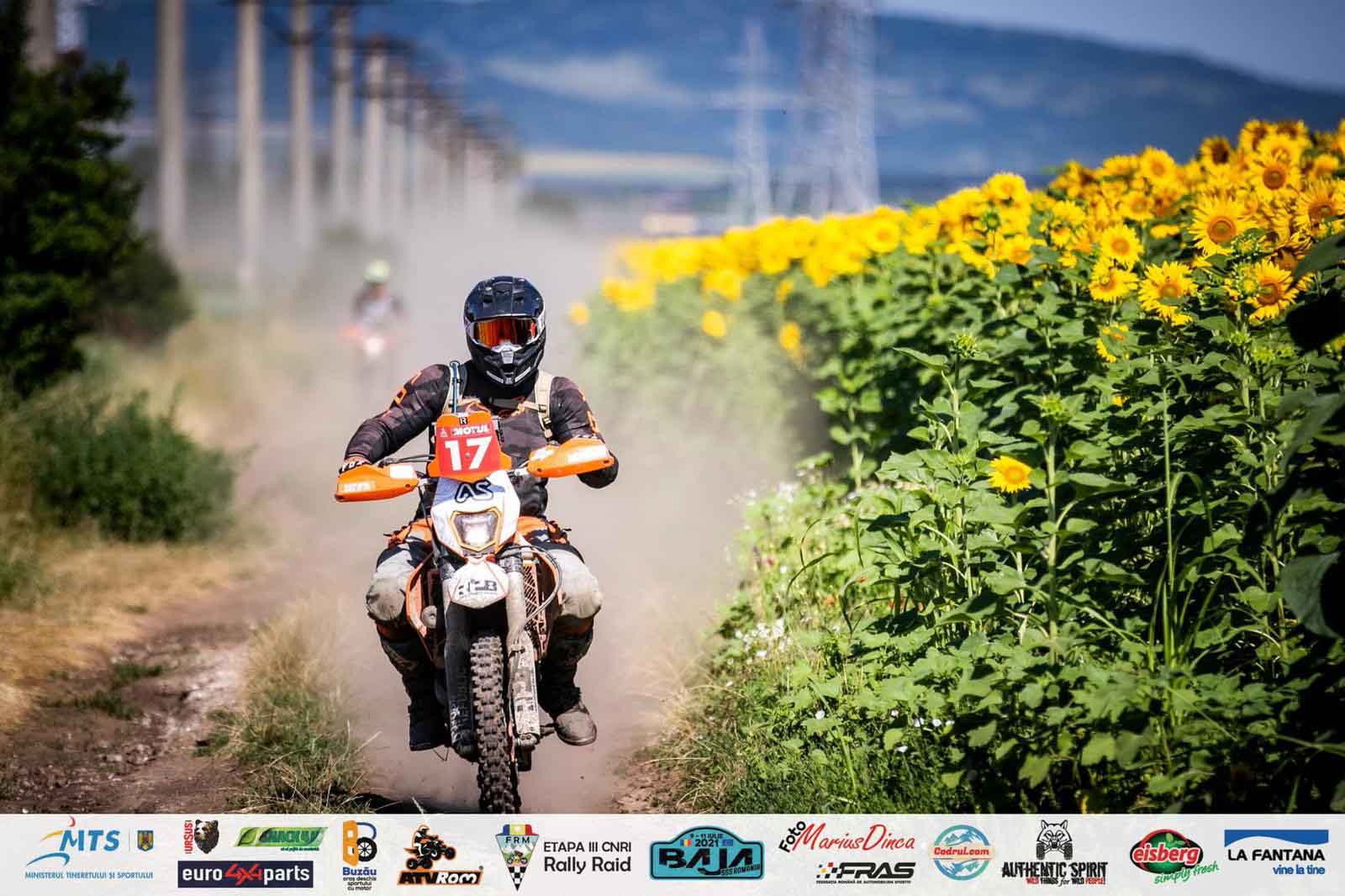 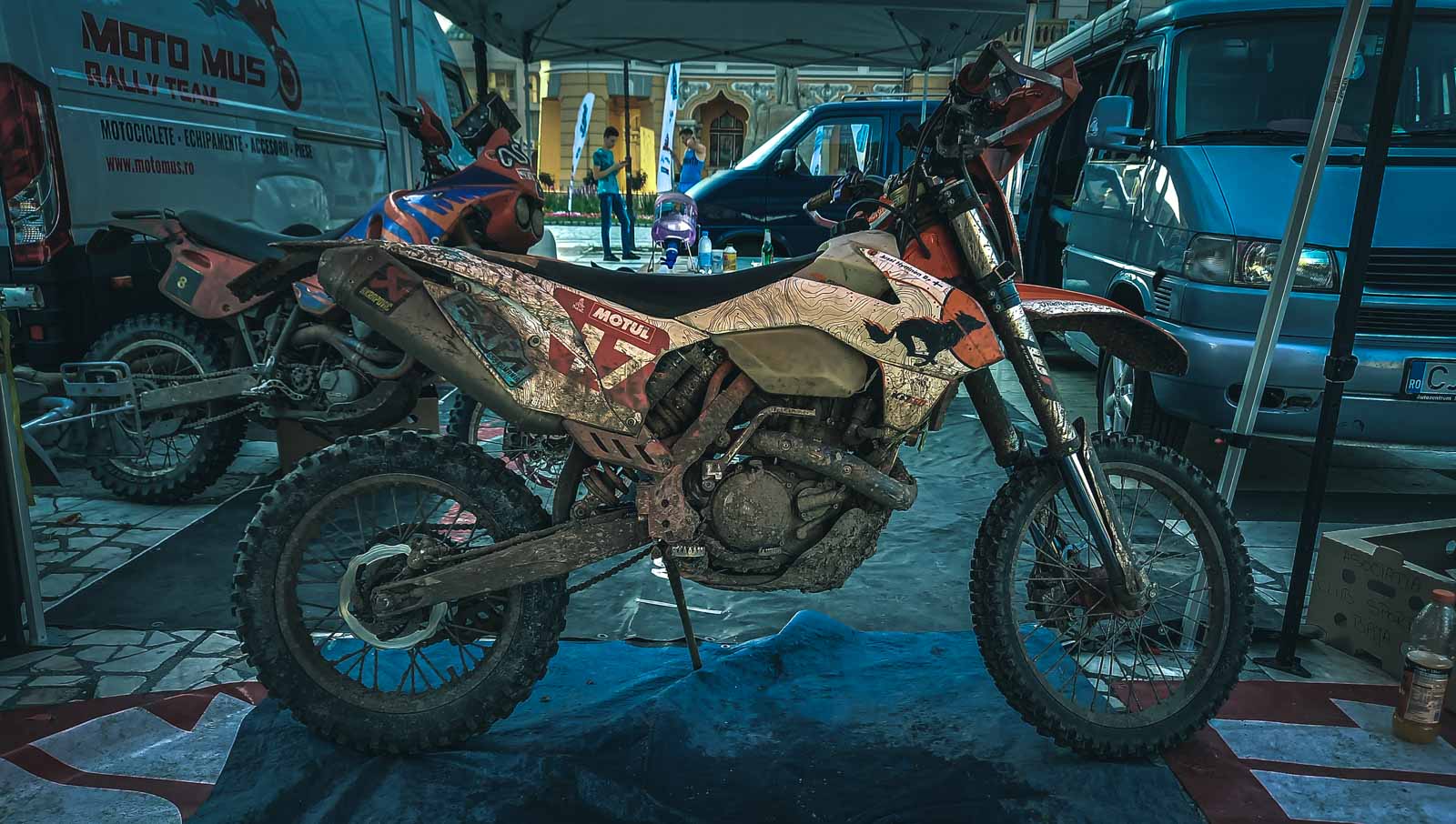 The biggest issue on the rally build, in racing conditions, were the AS clamps. I was very apprehensive of over-tightening the handlebar clamps as the base material is plastic, and it’s very easy to strip the threads. I tightened them as much as I dared, but the clamps would still move during racing. The upside was that they would for the most pare rest on the light cowl of the 500. Without the support, they would definitely have been on the fender next. However, hitting something bigger would regularly fling them up, off the edge of the cowl, so I needed to push them back down every now and then. Having said that, I love the AS clamps and with a bit of modification in the form of something to add friction between the aluminium of the handle bar and the plastic of the clamps should do the trick. An even better solution would be to drill out the threads and install a set of threaded steel sleeves on the clamps for a higher torque on the clamp bolts.

I was running a 13:50 final drive, which yields a 150 kmh fully open on the top gear on the 500 EXC which is more than enough for my rally endeavors. Having said that, I’d probably switch to a taller final drive next time, as the first gear is pretty much useless. Maybe a 14:50 at minimum. In the mountains I’d say the 13:50 is my favourite.

It probably comes as no surprise, that rally is much faster than enduro. Although cruising speeds during expeditions regularly go up to 120-130 kmh, there is rarely a need to alternate between fully open and full braking. I found that during racing conditions braking into corners is done later and harder, which calls for more braking power. In my case, the bike will be fitted with a Moto-Master 270 mm floating brake disc and adaptor for the OEM callipers.

From a general functionality perspective, I will add a F2R Rally Power Box under the headlight cowl, with connectors and blind plugs for all accessories required in rally, m enduro and expedition use. It will make switching between configurations much quicker and without soldering or having a large number of unprotected connectors.

Finally, the aluminium wing, holding the Garmin Montana was vibrating more than I’d like, so I think a brace of sorts would be a good idea in the next version of Jon’s AS rally plate. Having said that, the plate works really well, especially considering that it is just bent, and holds no welding seams. 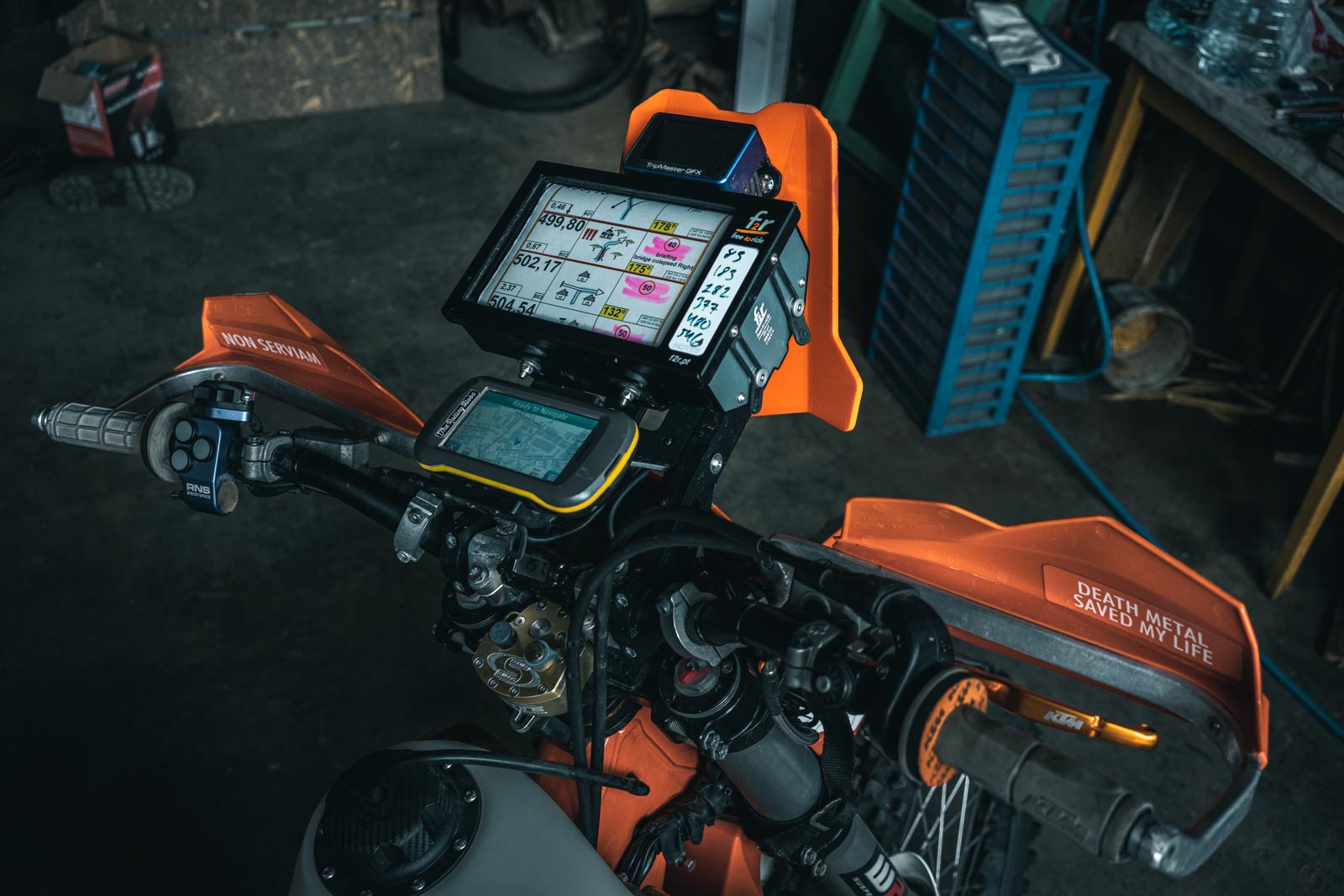 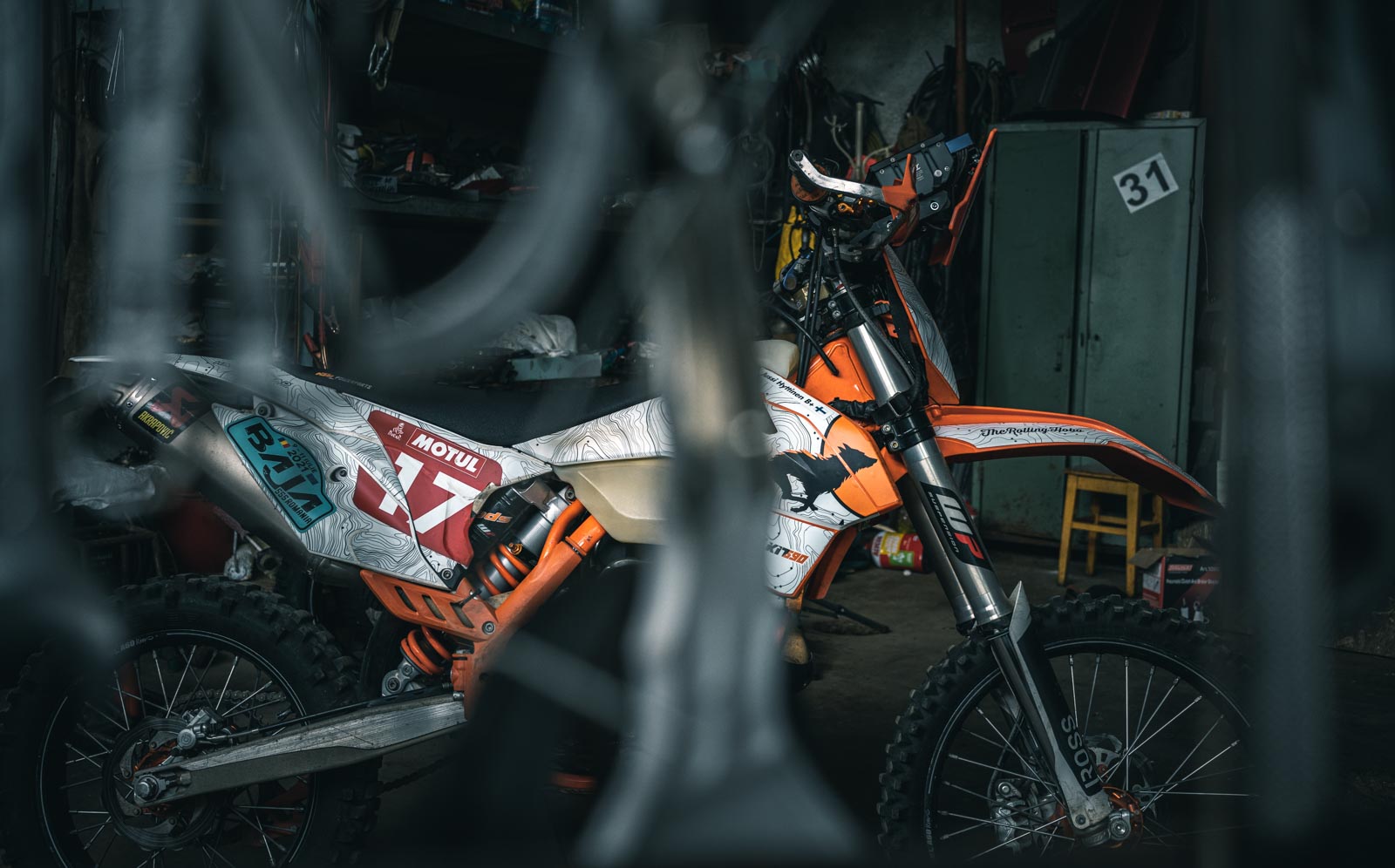 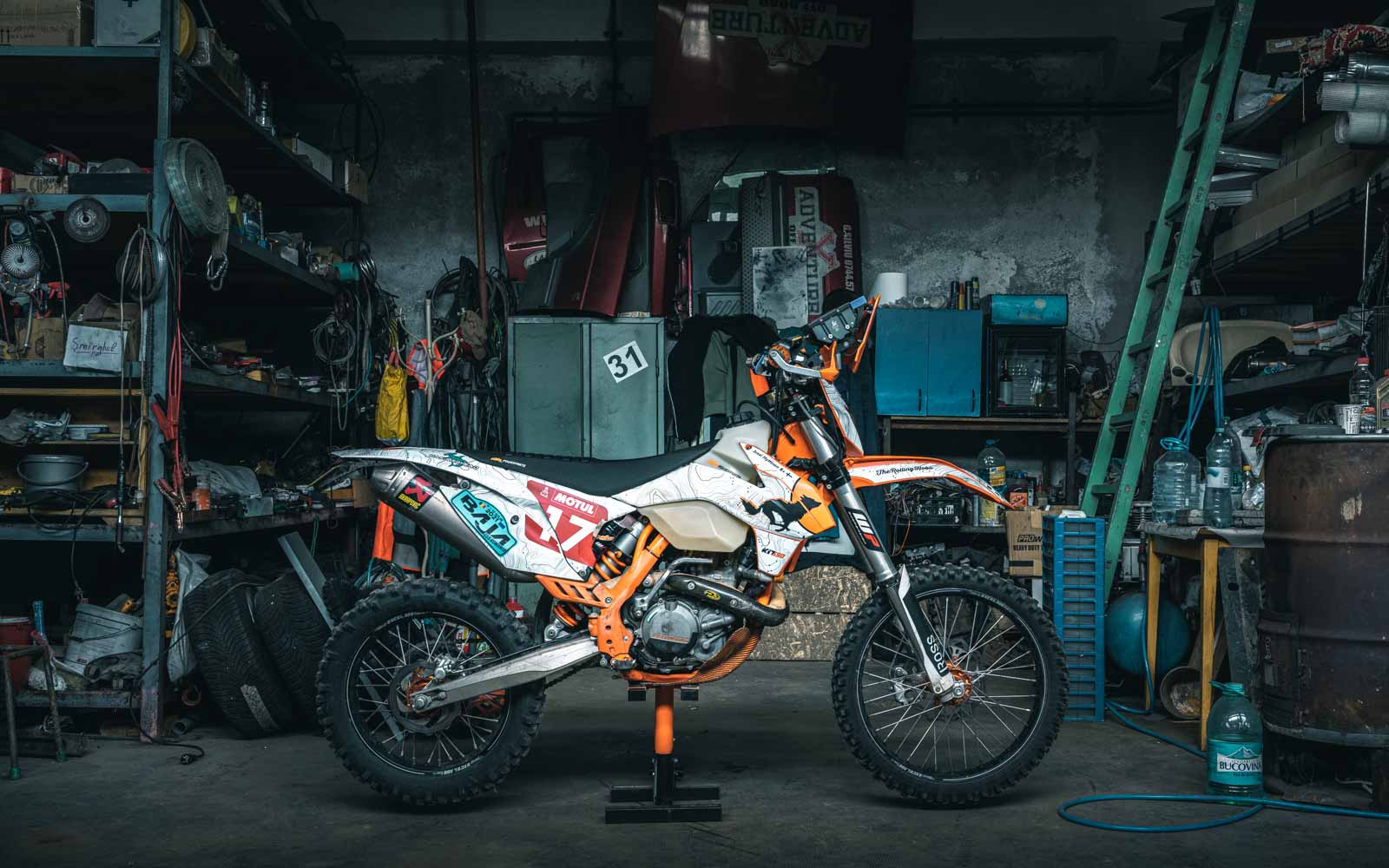