The week before last I kept my gym training a bit more conservative, to be fresh on the track day. But last week I went full retard and the week’s toughest gym session saw no mercy from my coach at the Raw Power Barn, where I train every Friday night. I felt pretty sore on Saturday, and did some active recovery workout exercises, which went too far and worsened the situation. At that point especially my biceps were really sore. Incidentally on Saturday night, Bas from Hyperpro was in touch about scoring an extra ticket to the enduro track the next day and asked whether I’d like to go. I said yes immediately, knowing full well that it was a bad idea since I also had climbing booked for Sunday night. But track days around Amsterdam are as rare as tolerant vegans, so you take everything you get. It was also the first opportunity ride with Bas and his girlfriend Linda, and I wouldn’t have missed it for the world.

The morning was cool and rainy, but the forecast looked promising. Kitting up in my storage unit was an awkward and stiff operation, but soon I was on the road towards Action Planet. It had been raining heavily during the night, so I expected the track to be anything than better compared to a week ago, when it had been “the wettest ever” according to the staff. While checking in to the track I bumped into Linda, whom I recognised from the Sibirsky Extreme 2012 ride report. Although we had never met in person, it was like meeting an old friend since I had followed her and Bas’ adventure with Walter Colebatch throughout Kazakhstan, Mongolia and Russia with keen interest.

There was a nervous positive energy  buzzing the pit area, and everyone was keen on getting knobbies on the track. Bas was riding his heavily modified 1983 BMW R65LS , Linda was on a 2018 KTM 250 TPI and myself on the 2016 500 EXC of course. I had heard stories of Bas’ skills with the heavy Beemer airhead, but it was truly inspiring to see him steer the 180 kg mammoth through the twists, turns and ruts of the track. Especially since the conditions were worse than the week before; more water, more mud and more bikes to chew up the terrain.

It seemed like pandemonium at times, with big adventure bikes chugging along slowly, stuck on the smallest of inclines or sprawled helplessly on their sides while their owners were trying to find purchase for their boots and hoisting the bike back on its feet. The largest group was fortunately single cylinder enduros and the bigger bikes never ventured into the oozing muddy mess of the forest track. Except for Bas of course; the big bike deathtrap didn’t seem to bother him at all, when we rode through it. The death grip and forearm pump I suffered from during the early laps of the previous weekend were completely absent, but my biceps were in bad shape with triceps joining to protest the continuance of the masochistic orgy of dirt. Still, the going was good and I rode laps with intermittent recovery breaks for around 2,5 hours. The conditions were atrocious, and the tell tale squeal of the rear brake singnaled that the pads were completely gone and that the copper back plates were grinding against steel. Bas’ front brake and Linda’s front and rear brakes suffered the same fate. It just proved to show, that even my solid rear brake rotor did not save from extreme pad wear when the tyres drench all moving parts with a loose cutting paste of water, mud and sand.

However, it was not the brakes that signaled the end of the track day, but the root problem was the same. All the slung mud clung onto the bike and in the early afternoon my engine was entirely caked with at least an inch of dry hardened clay, with further layers being applied every minute. The clay shell insulated the engine casings and prevented any surface cooling. Eventually the radiator temperature crept up to 96°C and it refused to cool down, despite coming off the throttle. The highest I’d ever gone was around 106°C in hot weather on steep and slow technical mountain tracks. It seemed strange that the engine was running so hot. It turned out that the mud had reached the radiator, hampering its cooling performance significantly and rendering the cooling fan inoperable. It was time to call it a day and head to the wash area. 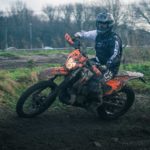 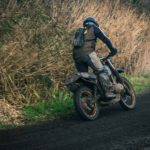 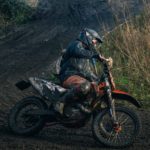 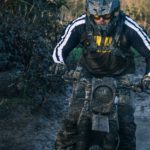 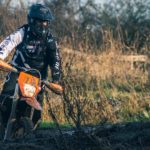 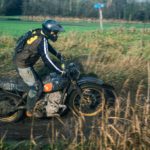 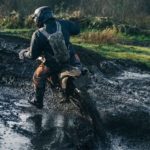 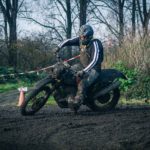 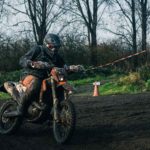 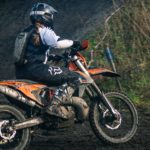 A ridiculous amount of mud was stuck on the bike, and it took a good twenty minutes to power wash it off. To my relief the radiator temperature remained nice and low after the wash so the strangely high temperature was confirmed to be caused by the mud cake. There would have still been a few hours of riding time on the track, but I had to head back home early as I still had a climbing session booked for the evening. So after saying bye to Bas and Linda, I headed back to Amsterdam to stow my bike and change back to civilian clothes. On the way I noticed that my rear tyre was squirming and vibrating, and I had noticed an uncharacteristic loss of traction on the track Which I had brushed it off as a deterioration of track conditions. But it seemed that my rear mousse was getting close to spent and needed taking a look at, and eventually probably replacing.

I made it back home in time to grab a late lunch before cycling to the climbing gym. It was definitely not my best night on the wall, and retrospectively it would have been a wise choice sticking to belaying my climbing mates instead of chugging up routes. Getting back home I felt like having been on a weekend outing on the bike, feeling tired, sore, cold and warm all at the same time. Naturally sleep came early, and in the morning I could hardly move my arms. The biceps were stiff and extremely sore, but with the help of ibuprofen and ice packs they loosened up, and after some leisurely cycling felt much better. Today on Tuesday, the right side is way better and the left side is tailing along on the mend so it would seem they are not inflamed, which is a huge relief.

What and awesome weekend! Many thanks to Bas and Linda for the ticket and the company! And also to Rick from Jax’s Racing Garage, who once again saved the day by providing photography to this post.