Previous Next
Fall Dirt 13. Day 1 / 7 km. Rolling with the iron rooster.
This was technically the first day of Fall Dirt 13. Despite the fact that I only rode seven kilometers. From the garage to the railway station that is. Yes, I took the train with the bike along with me. I was happy with this plan, as it gave me the opportunity to visit the arctic for the third time this year. Also, now that I was all by myself, I could hit some of the trails more suitable for lighter bikes.I arrived early at the car loading area and checked in. They let me ride right into the upper level of the double decker transportation car. The railway crew was super friendly and there was a jovial mood as they instructed me how to tie down the war horse. I ended up tying the front end from the top tubes and the tail from the luggage racks. It was bomb proof. 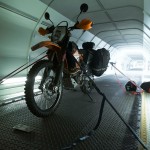 I took what I needed for the thirteen hour train ride and walked back to the railway station in Pasila. It would be another hour before the train arrived from Helsinki to Pasila. I tried to find some food unsuccessfully and ended up sitting on the platform, eating carrots in my riding gear. I was a pretty strange sight, I’m sure.

Once on board the train, I slipped into my sleeper cabin. I was happy to get my MX boots off and decided to lie down just for a second. I woke up over four hours later with the train well under way. I toyed with the idea of venturing into the restaurant car for a glass of wine but couldn’t be bothered. I tried to get some sleep but ended up tossing and turning restlessly. I was too excited about the four four day ride ahead of me to sleep. There was a specific trail that I wanted to ride, but it involved two boggy river crossings. Trying to assess the risks involved in riding it solo resulted in an endless mental tug of war. 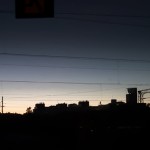