Previous Next
Fall Dirt 13. Day 2 / 529 km. Long awaited crossings.
I woke up to my alarm at 0650. The countryside outside was passing by my window in darkness. I noted with with pleasure that all of the foliage had not yet fallen. The dark tones of pine and fir back dropped the cheerful yellows of the last birches, till clinging to their summer outfit. Where the leaves had fallen, the roadsides were yellow, red and orange. Wetlands were clad in earthy tones of rust and subtle yellows. Also displayed in a dark backdrop of dark browns and lush greens.
It was getting close to the arrival time so I washed and kitted up. Promptly at 0750 my the train eased off to a halt at the Rovaniemi railway station. Picking up my gear I exited the train and headed back for the car unloading area. Everything went without fuss and once again the staff was incredibly friendly. Before too long I was out of the train with coffee and fuel on my mind.
I pulled over to the first petrol station and filled all five fuel containers I had to the brim. As I was alone, I was carrying some extra fuel. In addition to the 12 liter main tank and 4.5 liter Rally Raid rear tank I was carrying a five liter plastic canister and two one liter aluminium bottle. A total of 23.5 liters of fuel on the bike. After a quick coffee and a tyre pressure check, I took off at 0850. 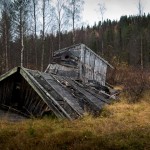 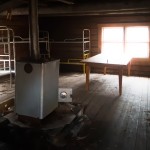 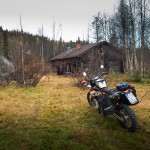 The bike felt strange. All the weight of the fuel in the back was making the front feel very light and nervous. I was armed with MX tyres for this trip, which added to the nervousness of the front on tarmac. I pulled over and dropped tyre pressures to 1.5 bar in the front and 1.6 bar in the back. I also shifted the aluminium bottles from the back pockets of the Magadan panniers into the front pockets. The bike felt better immediately. The only irritation was the five liter canister sitting very high and very far in the back of the bike. Luckily, according to my plans, the canister would be empty for most of the trip. But not today. 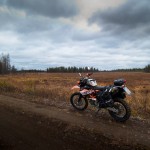 The ride from Rovaniemi to Kemijärvi involved tarmac in each end with nice gravel roads in between. I ended up adding layer after layer of clothing but couldn’t seem to get warm. The thick glove layers were making the riding feel a little sketchy. After passing Kemijärvi I hit gravel again. The magical scenery of Lapland was truly magical. I even caught a glimpse of the sun just after midday. It was very low. It was such a contrast to the days of endless sunshine three months ago. Now everything was preparing for the long dark of winter. 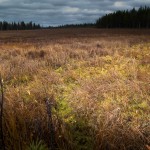 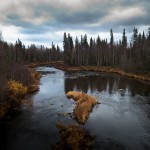 At this point I was dying for a cup of coffee but decided to wing it until Savukoski. That was be the last opportunity to get fuel for a while so I filled up to the brim and went inside the petrol station for a cup of coffee. I also asked some locals abut water levels, which they told me were low. This was good news, as it had a crucial effect on the odds of me making it over the river crossings. Having said that they immediately got into telling horror stories of people getting stuck and injured on the trail in question. My worst case scenario was stalling the bike in the middle of the river and taking a fall and drowning the engine in the process. I was getting more and more convinced that I would not make it across but decided to go and have a look anyway. I’d make a decision at Kuttusoja, which apparently was the worse one. 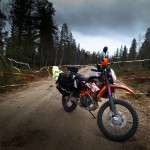 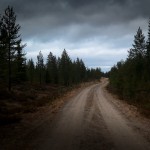 Arriving at the crossing in Kuttusoja I almost laughed out loud. Apparently all the videos and horror stories had grown in my mind. I found a nice underwater sand bank between two banks of wet turf. There was not even a drop into the river and no more that 30 cm of water. I crossed it without incident. Elated, I whacked the throttle and went skidding all over the wonderful soft sand trail that followed. Sporting an idiotic grin I rode on. 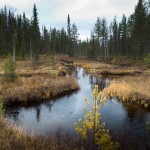 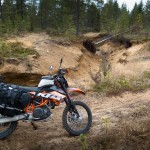 The Dunlop Geomax MX-71 I had at the rear was working very well. I found it to be a very predictable tyre with consistent characteristics. Compared to the TKC-80 and Enduro-3 I had had before, the MX-71 gave much smoother wheel spin grip. I found it quite enjoyable to power slide out of corners. I would have never had the confidence for this with the previous tyres. Unfortunately the Michelin AC-10 in the front was still all over the place. I could feel the heavy fuel canister doing its’ tricks in the back and giving me a hard time. It was rocking the bike from side to side in the power slides. I would definitely have to rethink the fuel issue. 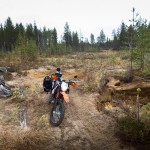 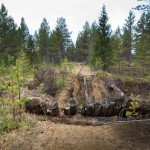 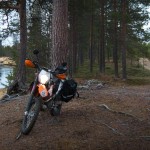 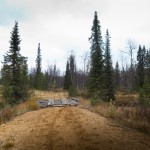 The old Kemihaara trail I was on follows the Kemi river. It snakes north with several streams joining into it. Some of them have bridges and some are almost too narrow to notice. However there was one bigger one left; Uuraoja. When I arrived at its’ bank I knew that it would be the last obstacle on this trail. It was a lot more serious than Kuttusoja, which I crossed earlier. Uuraoja had steeper clay banks on both sides with long deep ruts form previous crossings. Luckily the water was not deep. I scouted a nice sandy bottom and decided to take another route, away from the ruts. The banks were steeper and higher, but there would be less risk of getting stuck in the ruts. If I could get enough speed on the sandy bottom, I could power right over the bank.
I made my way through a short marsh to the river. I carefully steered the front over the lip of the bank and eased it into the river. Keeping my balance, I also dropped the tail into the river. The shallow sandy bottom felt solid but the other side looked a lot higher and steeper from the bottom of the river. This was it. I would have to make it out of the river. No use thinking about it, just decisive action and don’t stall the engine. I reved the engine and let the clutch out slowly to avoid wheel spin. Once I was off I gave it more gas and leaned back. Just before the other side I whacked the throttle and hit the bank. The front was light and the suspension compressed as the wheel went over the bank. I kept the throttle on and the rear followed with a roar. As soon as I was over I hit the rear brake as there was a fallen birch trunk just after the bank. I stopped just before it and sighed with relief. I was over. I had done it. I was happy. 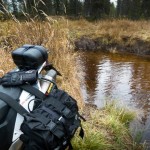 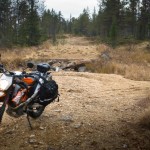 After some victory shots I took off again, heading north. The riding was pure joy. To me the 690 had proved that it would deliver when commanded with confidence. My trusty war horse. 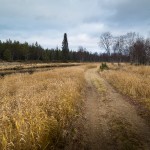 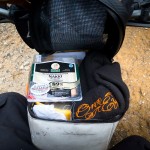 After a while I arrived at the empty Kemihaara cabins. I turned right and headed south east to Tulppio. I had read somewhere that there was a track from there to Tuntsa, where I was headed next. I explored two promising leads, which both ended up as dead ends. The first one just faded out in a forest and the second one took me to a swamp where I ended up getting stuck for a while. It was getting late and I had no idea where the swampy track was going so I doubled back and took the gravel roads to Tuntsa. It was a longer but quicker route.
On the way to Tuntsa I was stopped by fellow in an SUV. He was lost and wanted to get to Naruskantie. I was headed that way and told him to follow me and I’d point him the right direction. When we got there I gave him some last instructions and, after wishing him a nice weekend, sent him on his way. I turned left and headed north towards Tuntsa. On my way there, I was met by oncoming traffic. Several quads and 4X4:s. I wondered where they were coming from and continued to Nuoluskuru. I arrived at the wilderness hut in Nuoluskuru and started to unpack the bike as I would spend the night there. Apparently the guys I met on the way had left from here as there was still a fire going. I added some wood to it and roasted sausages. There was no cell phone coverage. The wilderness was quiet. 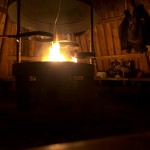