Previous Next
Fall Dirt 13. Day 4 / 673 km. Various obstacles and unexpected shortcuts.
I woke up just before the break of dawn. I crawled out of my sleeping and lit some candles for light. It was still relatively warm in the cabin so I didn’t bother lighting a fire. I as amused at how much of a mess one person can make inside a small hut. Riding gear strewn everywhere to dry and everything else I had with me on benches and pegs. The gear was pretty grimy from the ride in the rain on gravel in the previous night. I just hadn’t noticed it in the darkness.
I brought some water to boil on my stove and made a cup of coffee. Holding the cup in my hands for heat, I stepped outside to have a look around and sniff the air. I always find it interesting to wake up in a place that you arrived in at night. It kind of already feels like home but you have no idea what’s waiting outside. The cabin was pretty much in the middle of nowhere. It was on a gentle slope, surrounded by a mixed forest. The slope gave to a marsh which obviously had some planked trekking paths. The air was saturated with water but the there was only a light drizzle. I couldn’t make up my mind whether to put on my rain jacket or not. 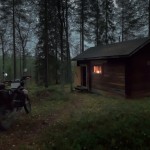 I was roughly 200 km north of where I was supposed to be, so I quickly finished my coffee and packed up. Once the bike was packed, I geared up and tidied up the cabin. It’s the code of the wild to leave any place you visit, in better condition that you found it. Well the place was in impeccable order when I got there, so I cleaned it up, stacked up fresh firewood and left a Rolling Hobo sticker for decoration. We were even.

I ended up putting on the rain jacket and took off. I remember riding down a slope on a footpath the previous night. It turned up to be a pretty slippery and rocky ride back up. Proper enduro. I was happy, as the rocky trail warmed me up. I really needed to move, to make it back home in two days. After about ten kilometers on gravel, I was back on my original route. The drizzle subsided and I was in a very good mood, making good progress on the nice gravel roads. There were some sections of tarmac in between, but I knew that I would have to ride some tarmac today to make it far enough south for the day.

After about 40 minutes of riding my good mood was about to be dented. I came to a river crossing, and the bridge was gone. I hopped off the bike to explore, but the water was deep and the banks high and steep. There was no way to cross here. I would have to double back eight kilometers and then find another route. I hate turning back. It’s humiliating and feels like defeat. That’s why I’d do pretty much anything to avoid turning back. I had crossed a railway 600 meters back. I checked my map and it connected with my route two kilometers south of the crossing. I rode back to the crossing to have a look. The railway looked pretty unused and there was just enough room to ride by the sleepers. I decided to take railway south. 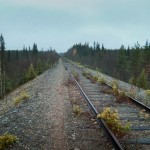 I kept a watchful eye on the mirrors, as being caught up behind by a train was my worst case scenario. The railway was on a steep embankment. If I had to bail, I would end up into a bog at the bottom of it. Well, it was only two kilometres and there was no railway traffic. There was a different kind of problem though. All the previous railway crossing had been on a same level. Unfortunately the crossing, where I wanted to get back on the road, was on a bridge, ten meters above me. The walls leading to the bridge were vertical and there was no way to get up there. I checked my map, which showed another crossing further south. I did not want to turn back, so I kept riding for another two kilometers, before finding an exit. I felt relieved and made it back to my route, but I had lost a lot of time faffing about with the “shortcut”.

The roads were absolutely beautiful. I had come further south so all of the foliage had not fallen yet. Instead, it gave a cheerful yellow checkerboard effect to the roadside forest. The roadsides were covered with dry yellow leaves, giving it nice highlight. I wish I had had a riding partner to see the leaves swirling around in the wake of a bike. 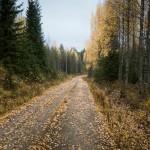 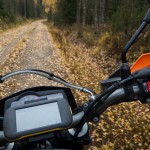 After staying on the route for another forty kilometers, I decided it was time to move. I took a detour to tarmac and headed for Kuhmo, refueling on the way in Suomussalmi where we had stopped in the Arctic Dirt Tour 13. It was funny to be back there as everything looked so different from three months back. I had a quick coffee, before hopping back on the bike and heading towards Hyrynsalmi on tarmac. It was another thirty kilometers or so and after Hyrynsalmi I was back on the good stuff.

I was happy to be back on gravel. I was in one of the magical moods where everything seemed to click. It was probably the coffee, but I felt very confident. The roads were nice, with enough twisty stuff thrown over lots of hills and valleys to keep it interesting. These are the moments that deserve to be shared with friends, but I was equally happy sharing it with my 690.

I always love the feeling of progress on trips. A telltale sign of progress is the change of terrain over days of riding. As I said the foliage had partially moved back up to the trees, but also the terrain was different. Gone were the rocky roads on the fells of Lapland, and the vegetation built to endure the harshest of conditions. They were replaced by gentler roads on sandy hills, housing stout pines and bushes of blueberries. The sweeping views of the north were replaced by short glimpses between trees on hilltops.

The riding was as good as it gets and after about 60 km there was a little extra cherry on the cake. I stumbled upon a very large area with sand banks. I was in a military area and there were distinctive marks of tracked vehicles on them. It was open so I decided to have a look. I spent a quarter of an hour going up and down loose sand banks. The MX-71 gave surprisingly good traction, even with my bike fully loaded up for the trip. 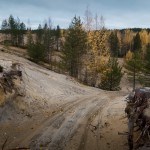 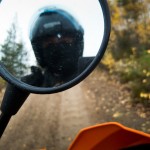 After messing about in the sand banks I headed for Kuhmo and refueled at around 1100. After Kuhmo I rode another 20 km section of tarmac to catch up with my schedule. I was headed southeast as my intention was to ride down the eastern border. Three months ago I had ridden up the eastern border north of Kuhmo, but the border on the south side was new to me.

The eastern border was a nice ride. I like the presence of the warning signs and the remoteness. The roads are mainly for border patrols of the frontier guards, but I ran into none. It was a shame as they are usually a nice bunch to have a chat with. 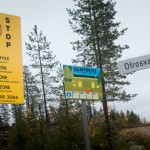 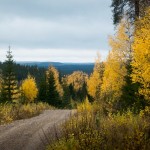 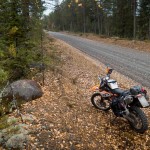 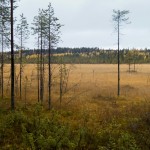 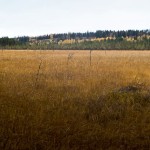 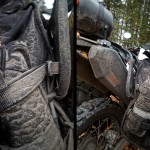 I decided to stop in Lieksa to refuel and have lunch. It is impossible to ride down the eastern border there anyway as it is a protected area with lots of lakes and rivers. After lunch I headed back for the border and the scene just got more remote. It felt absolutely empty and void of human beings. Kind of eerie actually.

I had been careless with my route planning and my route would have taken me into restricted areas. I would have ended up in the border zone and I had no intention of finding out what that would have resulted in. Despite what I said earlier about my feelings concerning turning back, I’d take my chances with a train any day instead of banging heads with the government. 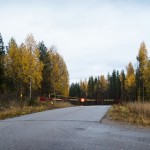 In the end I made it to Ilomantsi, which was my goal for the day. Despite the 550 km of riding, I still felt okay to continue. I think the sheer depressiveness of Ilomantsi was a key factor for the decision to keep pushing on. This was where my route turned southwest and it felt like the road home.

I really had no plan where to stay as I made my way in the last light of the day. The weather had improved and I was treated by a nice sunset. I rode the last leg in darkness, ending up in Kitee. I couldn’t find a wilderness hut nearby, so I opted for a hotel. Taking the first shower in three days was luxury. I thought about venturing into the bar for a drink, but couldn’t be bothered and dozed off. 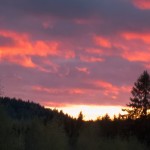