The adventure rider’s guide to the zimnik 110.

Previous Next
The adventure rider’s guide to the zimnik 110.

The zimnik 110 is a spectacular and rarely ridden adventure trail. It is in Siberia where nothing lasts forever. Trails disappear and new routes emerge. The 110 offers fantastic obstacles in an incredibly harsh and remote setting.

THE SHORT AND SWEET HISTORY OF THE ZIMNIK 110

The winter of 1974-1975 around Lake Baikal was exceptionally warm. In the meantime the Soviet “construction project of the century,” the Baikal Amur Mainline or BAM, was in full swing. Desperately needed construction materials could not be delivered to the BAM as there was not enough ice on Lake Baikal to construct the annual ice road. To keep the supplies flowing, the Soviets decided to build a road east of the lake, stretching 160 km from Ust Barguzin to Uoyan. Work was carried out at a fierce pace, day and night, in the brutal winter conditions of Siberia. The temporary road was completed on February 1 in 1975, and immediately put to good use. Up to 80 lorries rode up the new road daily, transporting much needed building materials to the BAM construction.

The BAM was eventually finished along with the BAM Road, and the temporary road became redundant. It was used as a winter road for a while, but nothing manmade lasts long in Siberia, unless it’s maintained. The road fell into decay. Bridges rotted, water washed away gravel and unearthed boulders. It could not be used for traffic any longer, but became a mighty test for off-road enthusiasts. It was christened “The 110” or “Zimnik 110” in accordance with the last surviving kilometre post on the road. 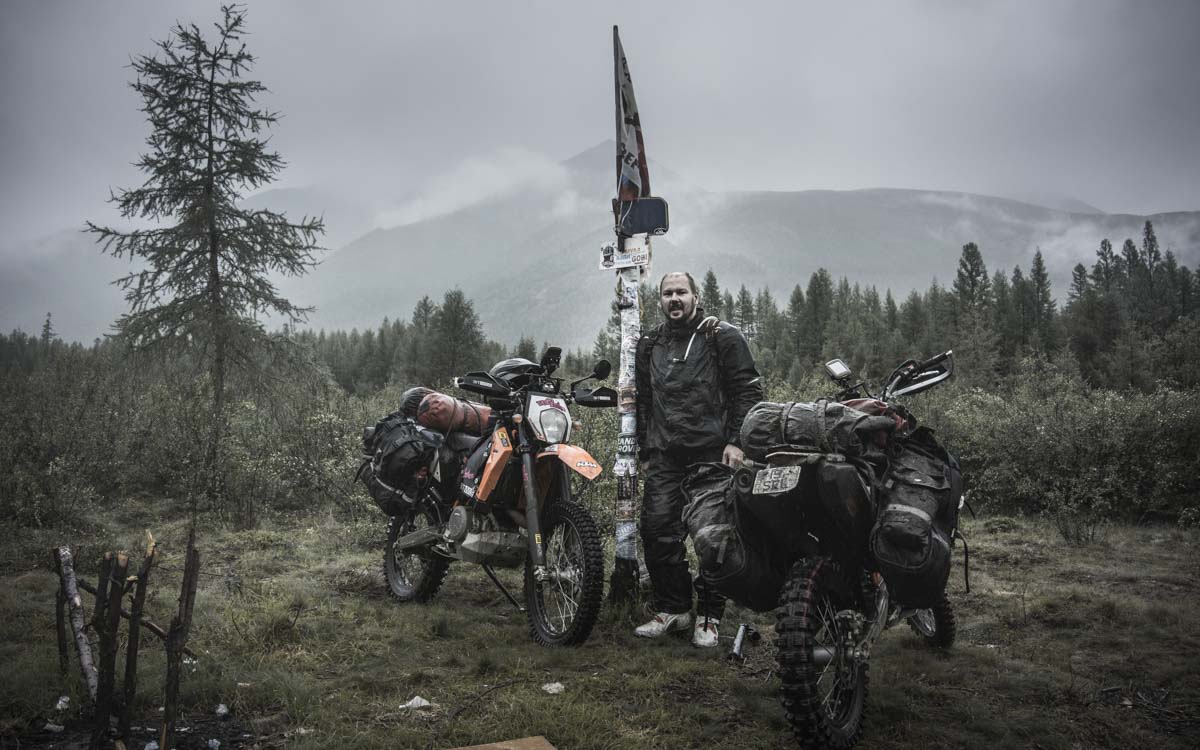 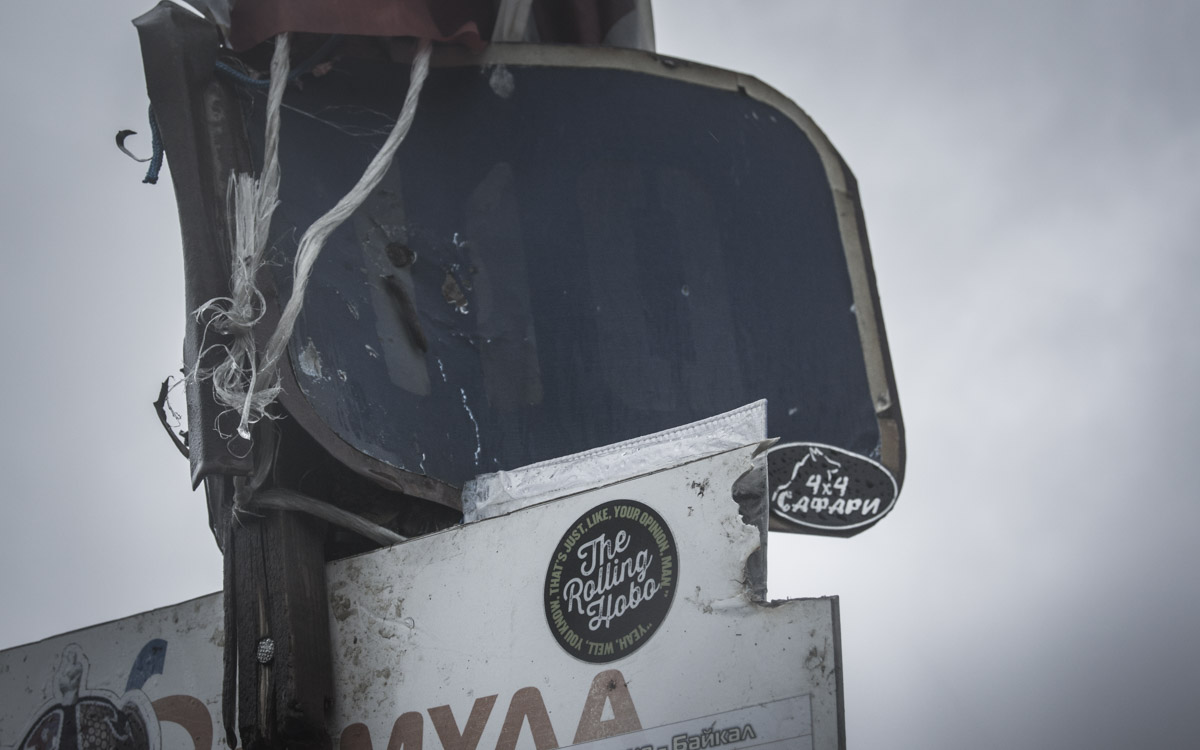 The southern section of the 110 runs through the Dzherginsky Nature Reserve and you need a permit to gain access. The permits are available at a rangers’ hut, just north of the southern crossing of the Barguzin River. In 2014 the cost of the permit was 250 RUB per person including the bike. The rangers were friendly and had excellent information about the conditions. Apparently they may also be able to help with crossing the Barguzin, but I cannot confirm this. Either way, having a friendly chat with the rangers is recommended.

The route contains several river crossings. Most of them are pretty straight forward, but the two crossings of the Barguzin River are severe. Even at low water levels the first crossing is tricky, and in high water they both become impassable for bikes. In that case you will need an off-road truck to get the bikes across. As with everything in Russia, help is available, so ask around in the villages.

Weather plays a crucial role in the whole route so having as much info as possible beforehand about the conditions is crucial. In addition to the Barguzin crossings, there is a deep water channel running across the road further north. It is short but deep if water levels are high. Luckily we only saw a trickle at the bottom when we were there. 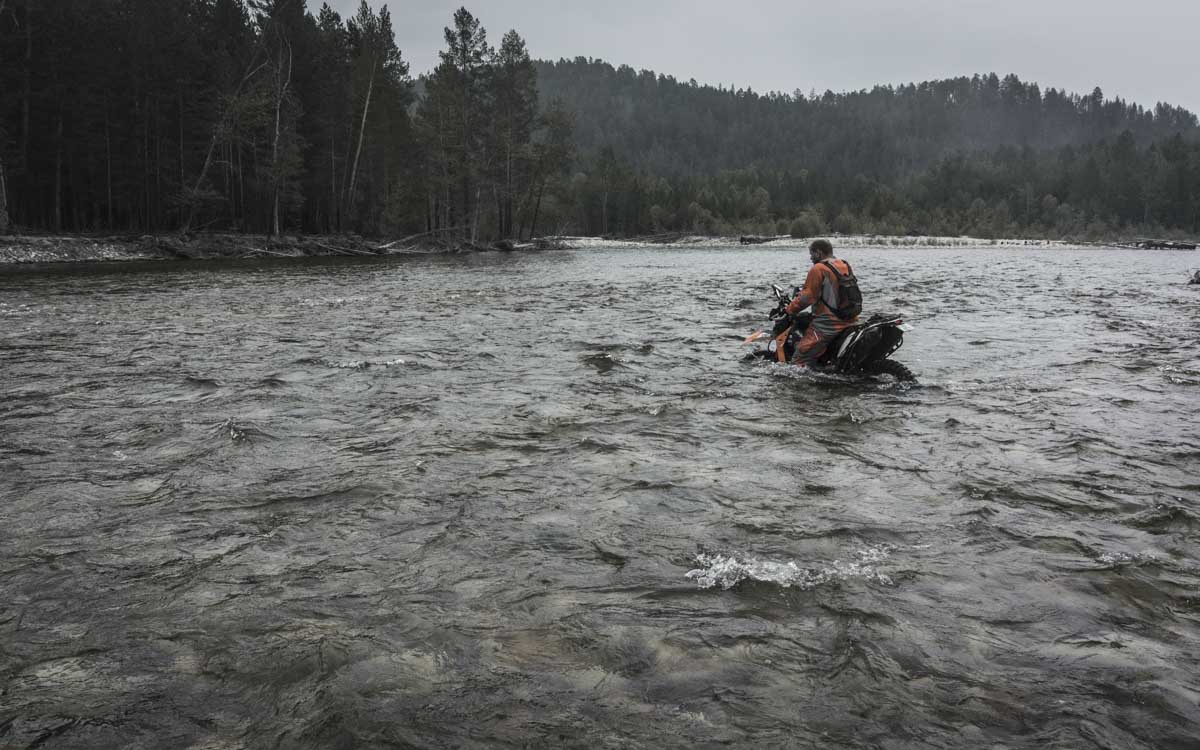 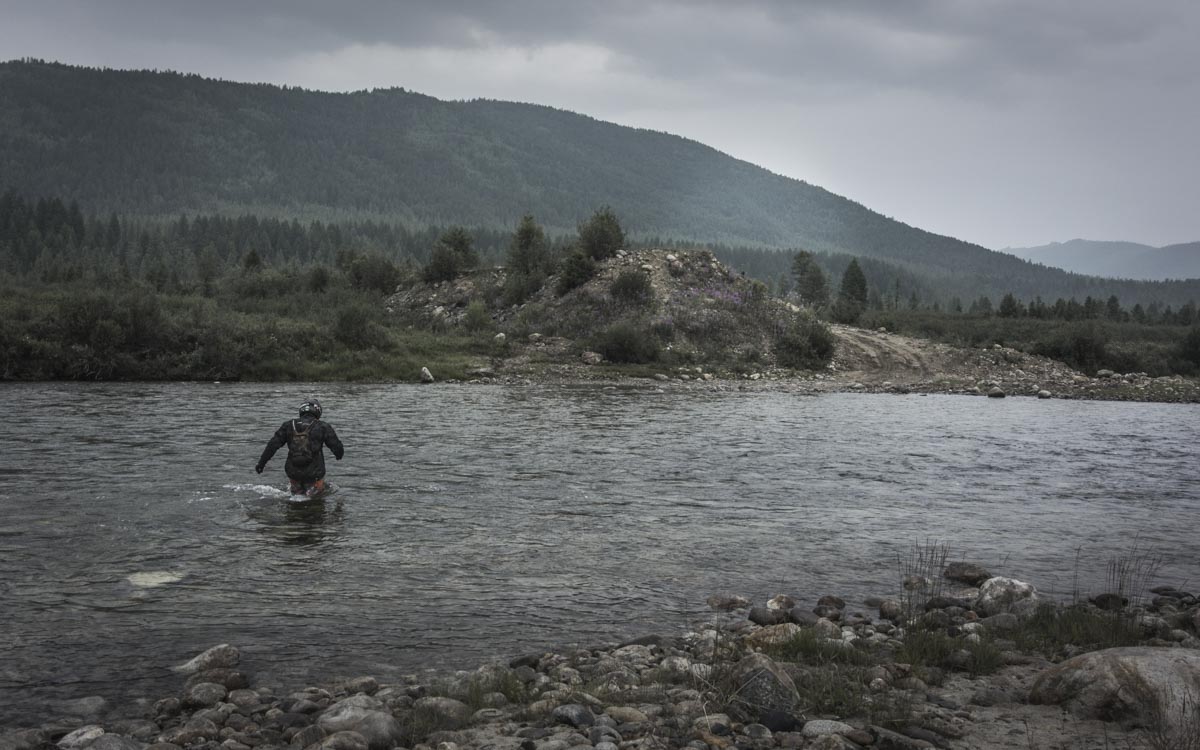 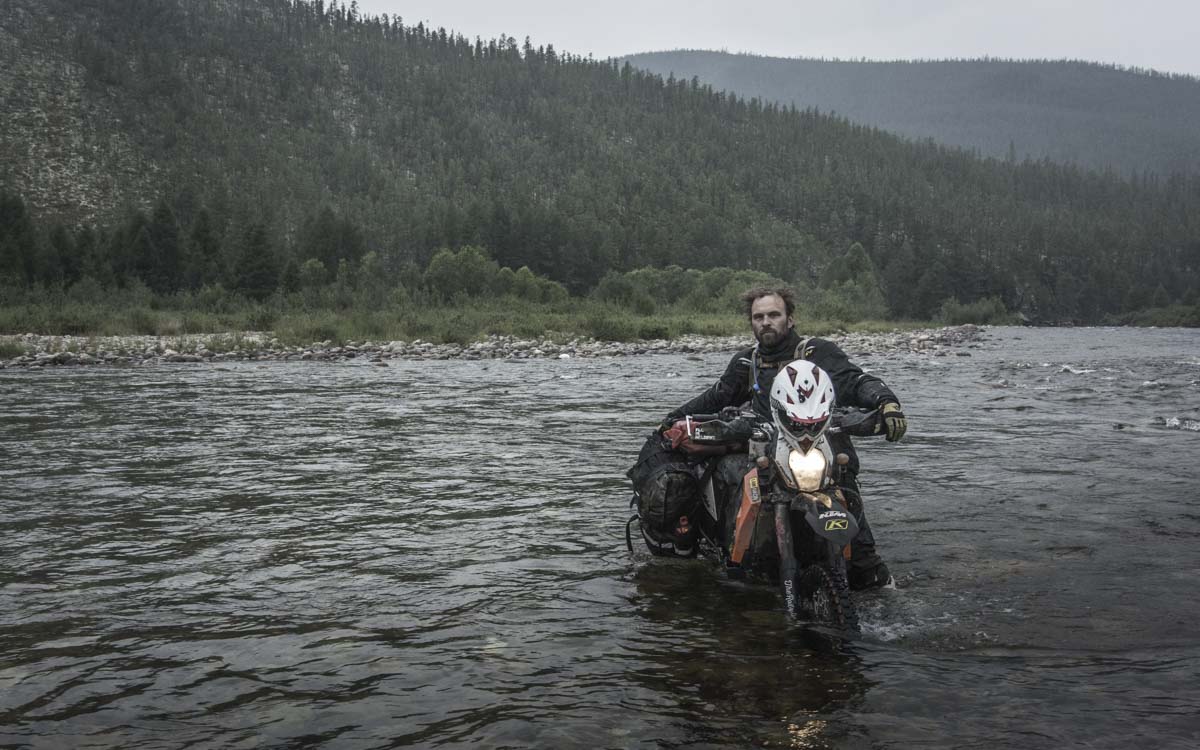 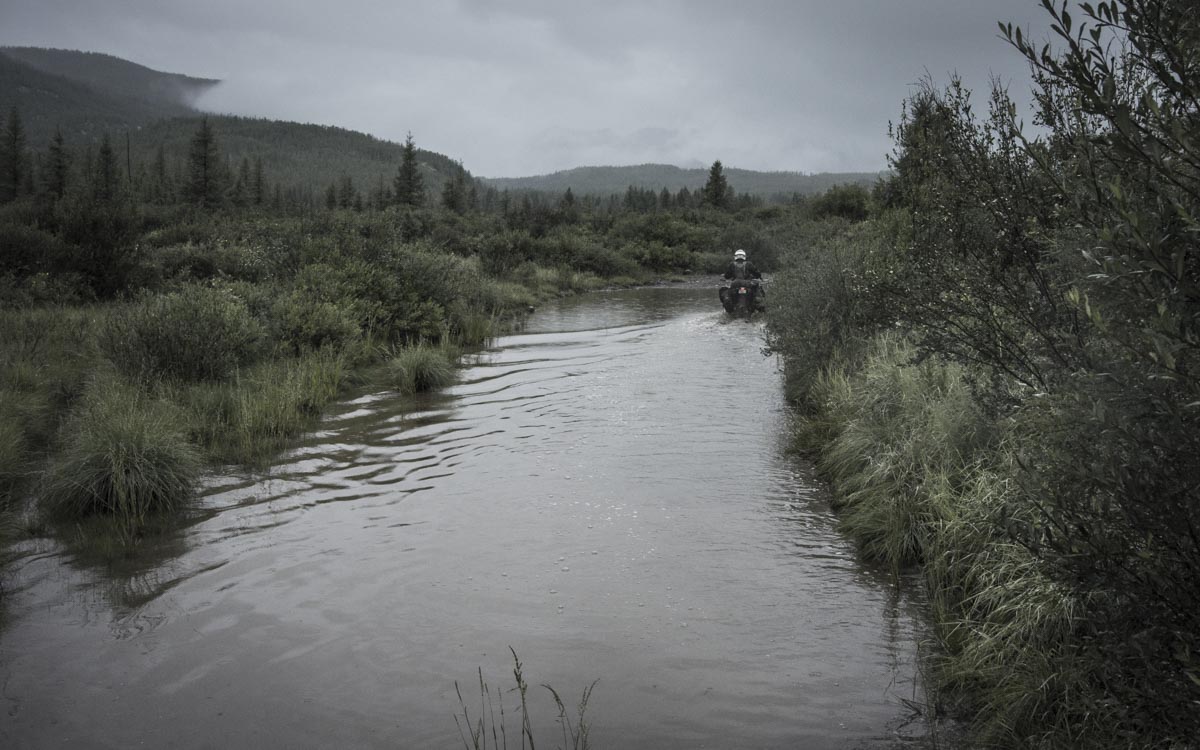 The PATH OF LEAST RESISTANCE

We rode the trail South to North, as did the Cosmonauts. I would say this is the preferable direction as you will be riding downstream on the hardest river sections and downhill on the more technical rocky sections. Another issue is the Barguzin River, as you need to cross it twice. If you ride from the north, there is a chance that you will be trapped behind the northern crossing and will have to ride back to the BAM. The benefit from riding from the south is that you will have immediate info on the condition of the river and can organize for transport across. 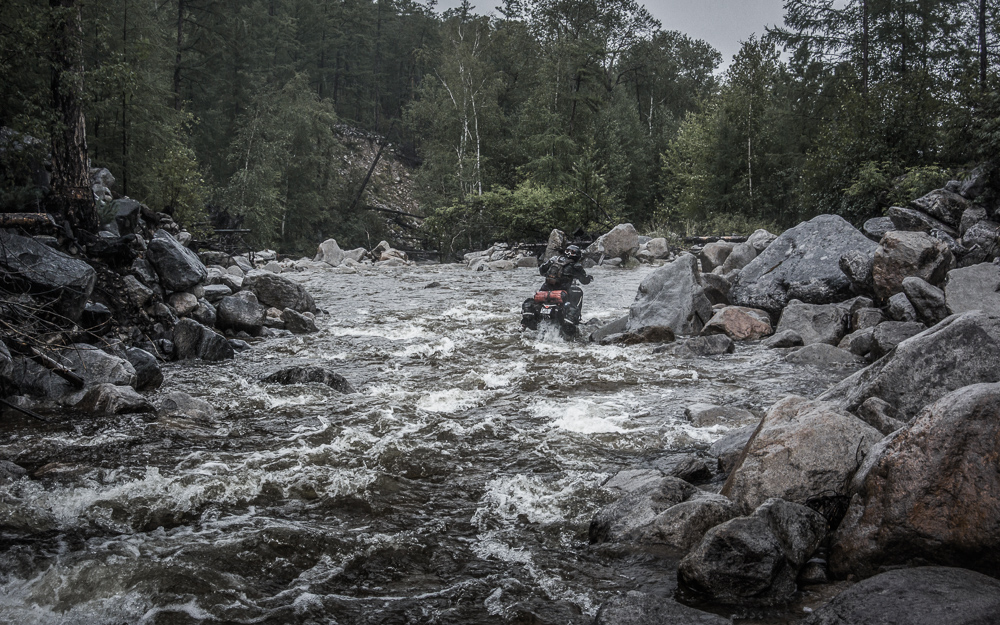 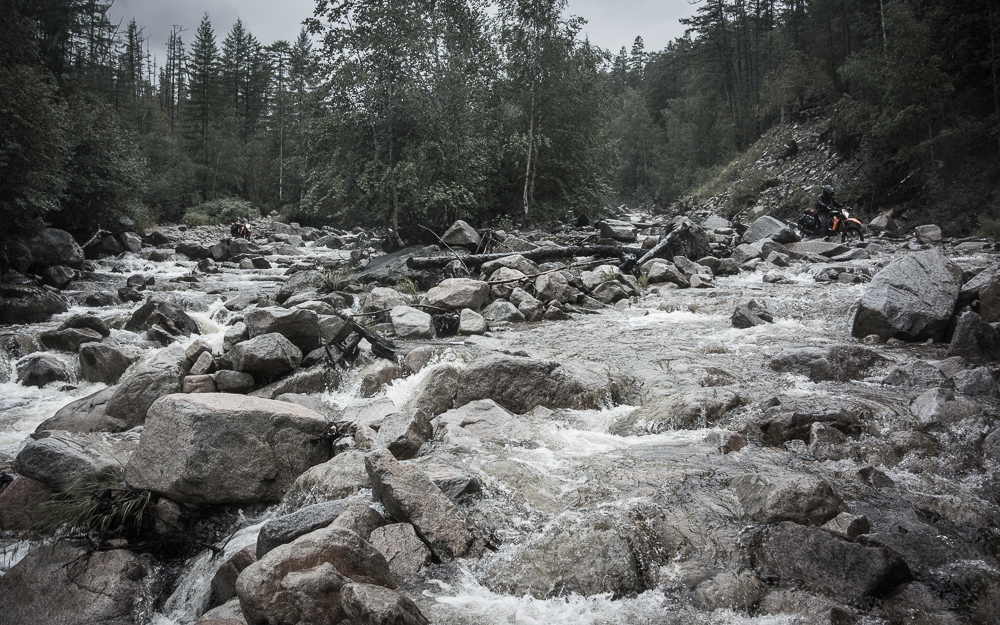 YOU’RE ON YOUR OWN

The 110 is an extremely secluded trail. The area is uninhabited, and save a few 4×4 expeditions it sees no traffic at all. If you end up in a jam, you’re on your own and there will be no assistance. It is advisable to take extra care not to damage bikes or riders.

A bigger team equals safety, and Mishutka recommended a team of three to five riders. His view on riding it with just two bikes was that the riders would have to be “very strong”.

The southern end of the 110 is easy going and you quickly start wondering what all the hype was about. Luckily it gets better the further north you go. It’s after the second crossing of the Barguzin when the fun begins and the obstacles start to escalate in frequency and severity. The road dips into wide puddles, becomes boggy and soft, is washed away by mountain streams and turns into boulder fields before finally transforming into a battle with the Sramnaya River.

To cope with all the technical terrain, in addition to the required enduro skills, a light bike is advisable. Having said that, one of the Mongolian Cosmonauts rode through the 110 with a KTM 990 Adventure. Just bear in mind that they’re Russians, to whom the normal rules of mortality do not apply, when it comes to off-road adventures. 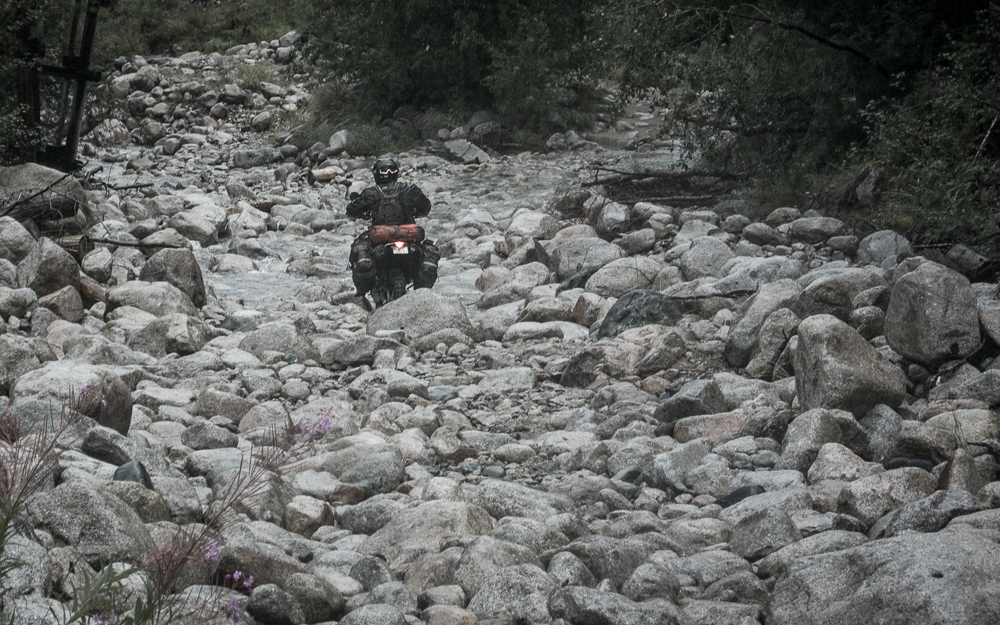 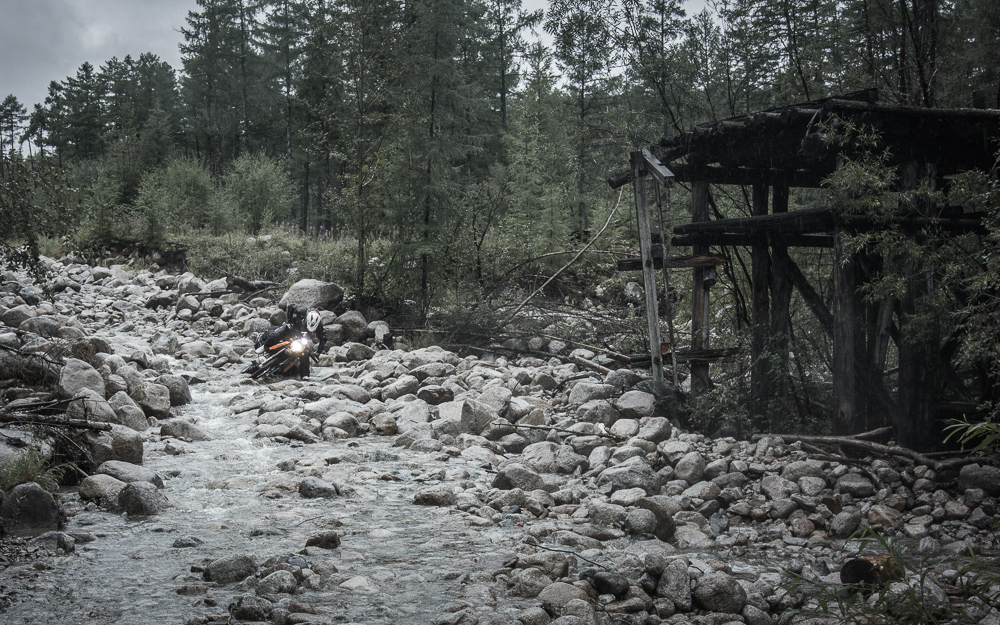 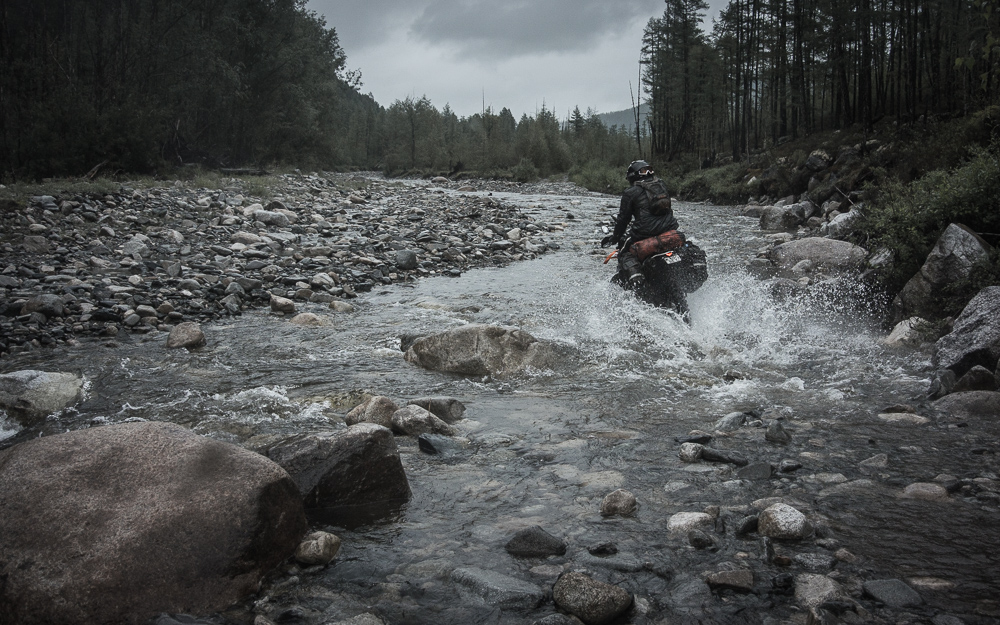 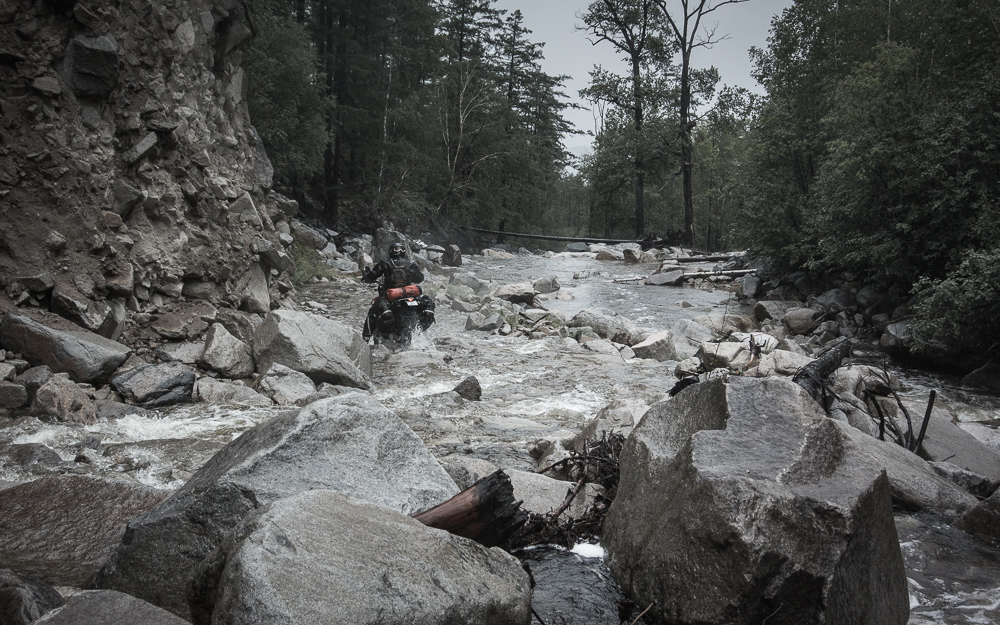 How not to get eaten

There are a lot of bears roaming in the forests, and they too use the road. According to the rangers they are not hostile, and avoid crossing paths with humans. We saw four of them during our ride and had no problems. We did encounter a female with two large cubs. As we were far, she didn’t mind but had we ridden between her and the cubs, it would have been a different story. A female will defend her cubs ferociously, so don’t get close to them.

Another issue to take into consideration is food and camping. It is advisable not to eat where you camp and store all food away from the camp. Never keep food in your tent, or you might be in for an extremely rude awakening. 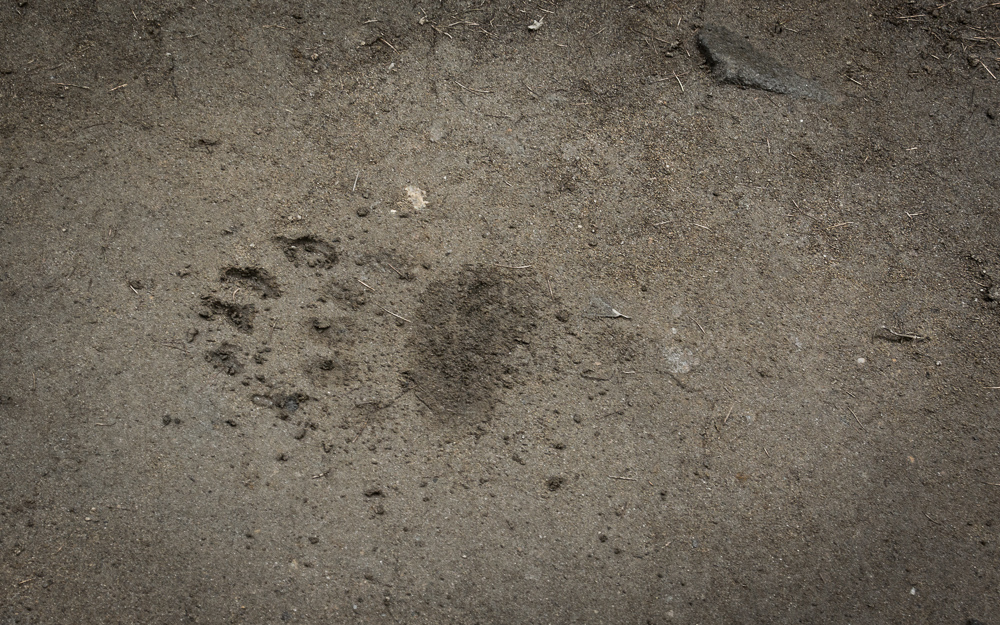 Suitable spots for camping can be found here and there along the trail, especially by the rivers. The locals said the water in the Barguzin is clean and drinkable. I don’t see why it wouldn’t be, especially if boiled for hot drinks or food.

Along the the 110 is a chain of old huts. They were built for the drivers of the trucks, in case of breakdowns or severe weather. Some of the huts are in good enough shape to be used for accommodation. Keep your eyes open, and you’ll see them by the side of the road.

There is no fuel available between Alla and Novi Uoyan. That’s a stretch of over 270 km. Having said that, there are rumours that you might be able to score fuel from locals’ stashes in the village of Kumora. It’s located 70 km before Novi Uoyan, just north of Lake Irkana, where the 110 trail turns into a proper gravel road, after the toughest sections at the Sramnaya River.

We fuelled up in Alla. We were riding two KTM 690 Enduro R K13’s with 26 l of fuel on board. I lost five litres on the trail due to a destroyed front tank, but made it to the petrol station in Novi Uoyan with my reserve light on. Fuel consumption went up considerably on the 110 in comparison to normal trail riding. 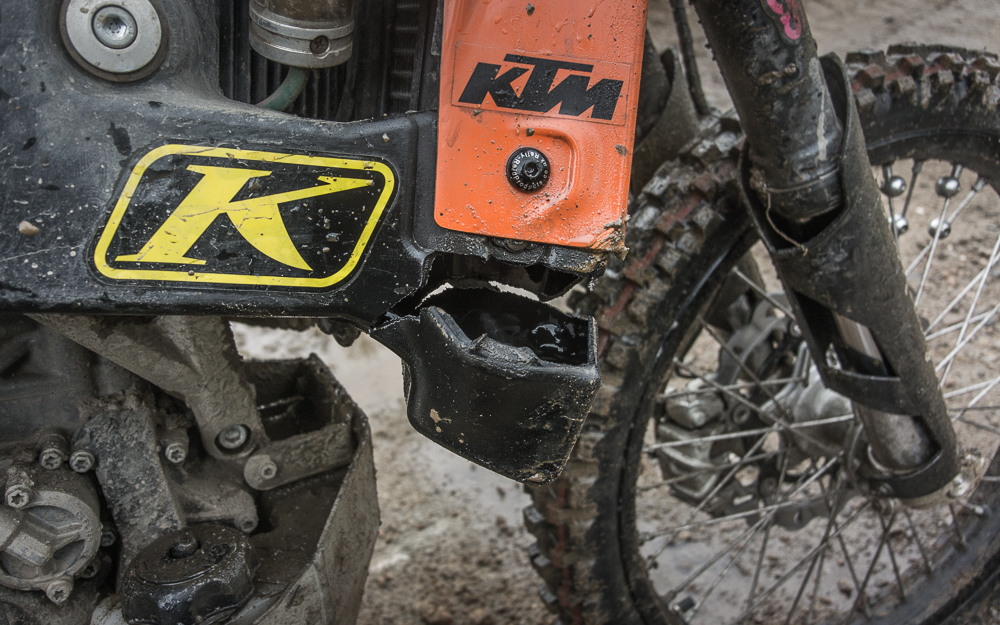 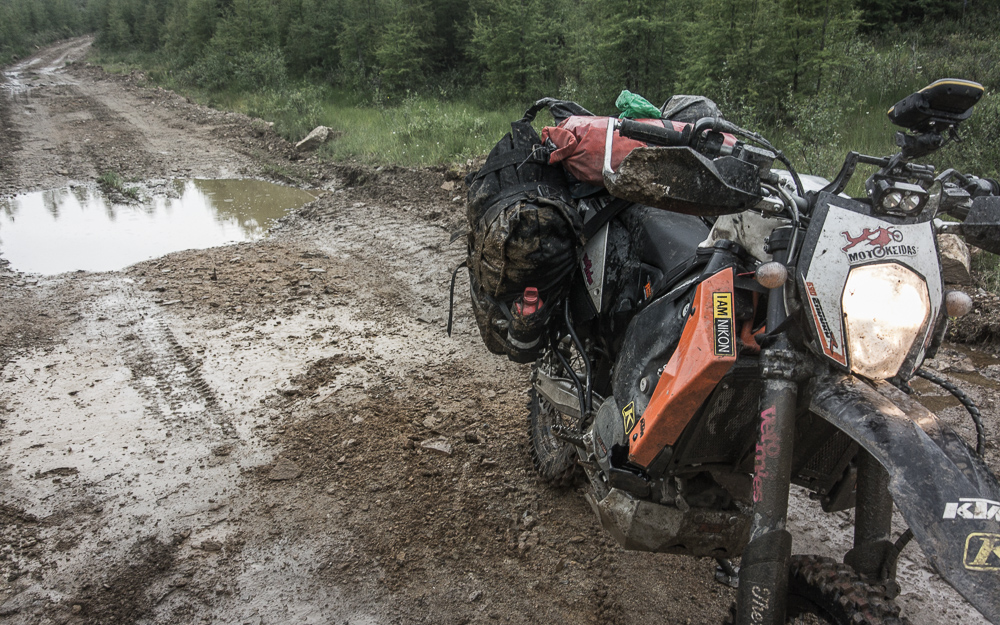 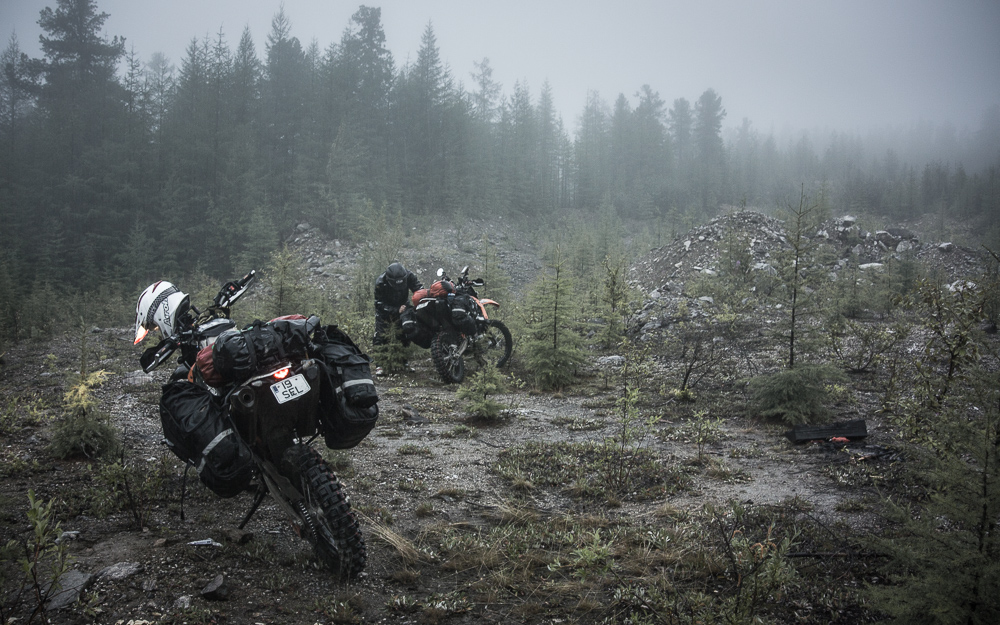 At the moment of writing, there were two documented rides of the 110.

The first ones to ride it were “The Mongolian Cosmonauts”, a Russian six man crew led by the local enduro deity, Mishutka. Their epic battle with the 110 in 2013 is well documented:

SECOND RIDE: THE ROLLING HOBO AND THE WALRUS

Our two man unsupported crew in 2014 did the second documented ride. Compared to the Cosmonauts we rode the 110 in very bad weather, but were very lucky with the water levels. The Cosmonauts had much deeper water in rivers and puddles. So deep in fact that the Barguzin could not be crossed without the use of boats and trucks. At the end of our ride, the Sramnaya River clearly had more water than the Cosmonauts, but it was still rideable.

The GoogleMap contains the actual GPS data from the Walrus’ and my ride on 30.-31.7.2014. The track prove itself useful when navigating some of the confusing wet terrain and wide river crossings. Most of the waypoints are where they are supposed to be but some were tagged from memory. If you find any discrepancies, please drop me a note and I’ll correct the data.

You can download both the GPS track and the waypoints from the embedded GoogleMap. Use them at your own risk. I take no responsibility of the validity of any of the information presented here. It is rather a description of what we encountered during the short time we were there. If you decide to use any of this information, you do so at your own risk. In any event, information will not save you on the 110. Only your will, and the choices you make on the trail, will affect your chances of being granted passage through the 110.

I wish you good luck.

If you have ridden the 110 or have any info that could prove itself useful to other riders, please let me know and I’ll add it here. Preferably ride reports, GPS data, waypoints and POI’s, corrections to erroneous information etc.