On day 24 The Crimson Trail immediately pushed into the mountains outside Kolasin. Tarmac ended as the trail climbed steeply up the southern face. The riding was a little tricky, as my worn tyres weren’t finding purchase on the loose gravel over hard dirt. The hairpins were gruelling to ride, but I got up in one piece. Once on the col, the trail snaked through a high grassy plateau between rocky walls. I was there all by myself and didn’t see another vehicle for most of the day. I took my time with the trail, enjoying every second of it. 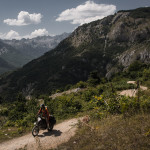 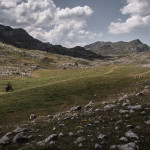 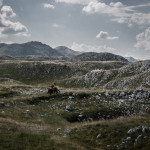 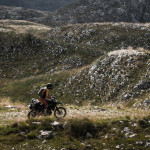 As I dipped down onto the mountainside on the other side of the plateau, I noticed familiar dark clouds massing in the east and headed my way. The trail was very rocky and grassy so it would have been pretty gnarly to ride in the wet with my worn tyres. So I instead decided to run for it and change into rain gear later, if the rain caught up with me. The riding was superb, but very energy consuming as I was pushing hard to get ahead. Powering up and down rock gardens and enjoying some short airtime from the occasional grassy crest. I felt exhaustion creeping in and my right arm starting to ache. Still, I pushed on and only stopped when the rain was upon me. As expected it came in buckets, and the trail became extremely slippery. Luckily I got through it without incident, riding at a leisurely pace. I was pretty tired anyway, so there was no point in trying to ride fast and risk a costly mistake. 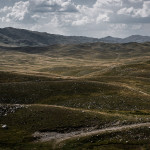 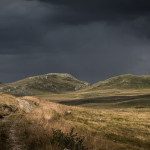 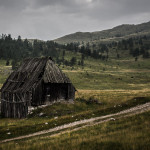 As I reached the village of Njegovuda, I realised that dirt on The Crimson Trail had come to an end. My front tyre was finished, and I had decided to head to Sarajevo in hope of finding fresh rubber. Also, my time and body were as spent as the tires, so continuing on dirt was not an option. The Crimson Trail ended there, for now. I would be going home.

I parked by the road and leaned against the bike, to soak in the last glimpses of the magnificent scenery. I had been very lucky, as the last sixty kilometre dirt trail had been one of the best on The Crimson Trail. It was a good finish to the almost 6000 km adventurous part of the ride. The rest of the ride would be on tarmac, but it wasn’t over yet. I still had almost 2000 km and five borders to cross before getting home.

The border crossing to Bosnia went smoothly, but it soon began to rain again. The wet tarmac was horribly slippery on my worn MX tyres, and touching the rear brake immediately locked the wheel. It was nerve-racking and very slow riding. Luckily the weather improved a little later just after dusk. Roads became dry and as I didn’t have to worry about the tyres any more, I opened up and fast forwarded to Sarajevo.