Day 15 on The Crimson Trail started rather abruptly as I heard a voice from outside my tent. I hastily put on my gear and ventured out to investigate. I found myself looking at a man holding a pitchfork and looking at me quizzically. He turned out to be the owner of the land I was on but he had no problems with me camping there. After some some polite words he walked up the field and went to work. I continued on the trail, stopping briefly for some coffee in the next village.

I was getting increasingly worried about time, as I was well behind schedule. I was hoping the trails would remain fast, but it was not to be. Instead, the next section was again on very steep and technical ground. Staying on the offensive and focused required a lot of energy and it was another hot day. Stopping to take some photos on a ridge, I noticed a large flock of sheep on the hillside. The sheepdogs had noticed me and all hell broke loose as they ran around the bike, barking at me. It was pretty humorous, and I took care not to run any of them over as I opened up on the ridge and made a hasty getaway. 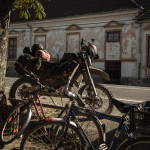 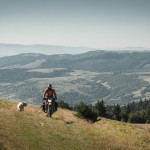 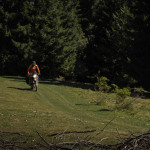 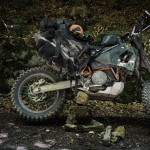 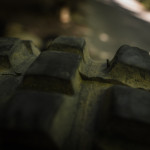 The section ended perfectly at a restaurant and I had a huge lunch before continuing. About a kilometre later I noticed that my rear tyre felt strange and immediately stopped to investigate. It was deflated and while changing the tube i found a nail stuck through the tyre. Unfortunate I suppose, but mainly due to the loss of time. I decided to take a faster route towards the Bulgarian border. Just after midnight I found a suitable spot for camping, tucked behind a corn field and out of view. I was feeling pretty exhausted and sleep came immediately.

Day 16 on the Crimson Trail was going to be hot. Already at 0700 it was very warm outside as I started packing up my camp next to the cornfield. I proceed quickly to the Bulgarian border and made it through very quickly with just a passport check and chat with the friendly border control officers.

Bulgaria was very different to Romania. The alphabet was cyrillic and there was a distinctive ex-Soviet flavour here and there. Architecturally it was very hard to pin point though. It seemed like it was a strange cocktail of the Eastern Europe, Soviet and almost a Spanish flavour to some of the roof tiling. Odd and of course very enjoyable.

I had planned to ride from Romania to Serbia, so I had no planned route in Bulgaria. My maps were pretty poor and most of even the smaller roads were be paved. I was getting rather frustrated with the riding so I had to improvise. I decided to take any small forest or field roads that were going in the generally correct direction. The strategy paid off and I found some nice trails and even bumped into a large abandoned building in the middle of a forest. There was derelict guardhouse and a gate on the road, but had clearly not been active for a very long time.

The day was indeed incredibly hot and as I stopped for lunch, my phone gave an overheating warning. I hadn’t seen that before. Stopping for photography on the trail was very tough in the heat and had to be planned carefully. I needed a spot where I could set up in the shade and then ride through the scene and pack up again in the shade. Even with the precautions I was sweating profusely and going through my CamelBak quickly.

A section of the trail was completely overgrown, and I had to ride some sections with my head all the way down on the bars. It was of course very slow and hot going so I decided to make a move and head for the main attraction I had in Bulgaria. The Buzludzha Monument. 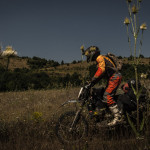 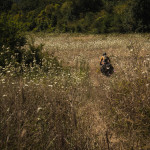 I arrived there after a stretch of tarmac but had to stop on the way due to another overheating warning from the bike. It was my fault though, as I had been hard on the throttle on the way up, enjoying the endless hairpins on the flat tarmac.

The monument was a impressive example of Communist concrete architecture, perched high in the mountains, where the final battle between the Bulgarian rebels and the Ottomans was fought. After several successful clashes against a much larger Ottoman force, the battle went badly for the Bulgarians and their leader, Hadzhi Dimitar, was mortally wounded. His great adventure came to an end a few weeks later in a nearby village. A verse from a poem by Hristo Botev beautifully verbalises the unbreakable spirit of a man set on his own path. Non serviam.

“He,who falls while fighting to be free can never die: for him the sky and earth, the trees and beasts shall keen, to him the minstrel’s song shall rise…”

I parked in front of the main entrance of the decaying Communist behemoth. It had been unmaintained for a long time and closed from the public due to the imminent danger from falling roof plating among others. I knew there was a way in though, so I packed up my cameras, tripod, tank bag and helmet and went looking for the entry point. On the northern side of the building I found the hole I was looking for and went to have a look. I was in luck as there was a Russian couple inside, to whom I passed my equipment before crawling in.

The place was silent, with an ominous echo from the gravel grinding under my MX boots. I had reached the bottom level, under the main hall and after some photos made my way up. I knew the place from some research I had done earlier and knew what to expect. It wasn’t a difficult place to navigate though, and I quickly found myself looking at the great circular hall with a hammer and sickle roof mosaic. It was stunning as was the outside balcony with sweeping mountain views. I ended up staying for two hours, not wanting to leave, just enjoying the spectacular views and architecture in the low western sun.

Everything comes to an end and it became time to move on. On my way out I bumped into two Bulgarian guys, who were also bikers. They gave me ahead getting the equipment out of the building and we chatted for a good while before splitting ways. Georgi and Vladislav were on their way to party at the Black Sea and I decided to catch up some lost time and made a spirited ride to Sofia, arriving there around midnight. It had been a tight couple of days of riding and I was utterly spent. I decided to take a day or two off and recover. 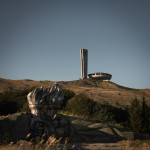 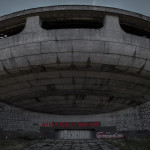 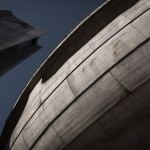 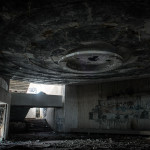 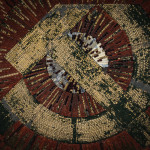 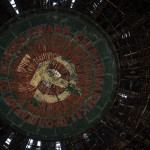 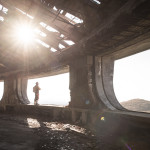 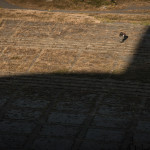 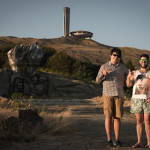