Previous Next
The Crimson Trail, Macedonia

Day 19 on The Crimson Trail started off in Sofia and I was anxious to get moving after being cooped up in my room for two full days and some. The first stretch was a tarmac transfer to the Macedonian border, but progress was cut short by a flat front tyre. The whole tube change turned into a great big mess due to my hastiness and ended up having to patch up two tubes before the job was done. As the bike was on its side, I decided to empty the leaking RR tail tank and also clean up my radiator as the engine was running pretty hot.

I finally made it Macedonia, and soon after the border connected with The Crimson Trail. It became immediately clear that Macedonia was going to be tough. Steep ascents and descent, with a hard surface but a lot of loose stuff on top. The rear tyre would spin out with just a touch of the throttle. Following the trail I made a navigational mistake and ended up on very steep ground in the mountain forests. I had stubbornly followed the track I was on as I was sure it would connect with the main trail. My progress came to an end after several falls on the steep and technical ground as the trail became even steeper and completely overgrown. Turning the bike around on the steep ground was extremely difficult and I fell of it in the process. The bike was pretty much upside down with the tyres facing uphill as the last rays of the sun disappeared. It was a pretty bleak situation, as I was utterly spent from the battle with the mountain track and picking up the bike several times. Somehow I managed to turn the bike around and get it on its feet, but I had spent every last drop of energy and almost threw up from the exertion. I backtracked to the original track, and camped in the bushes by the trail. My arm was completely wasted but I hoped it would be better in the morning. 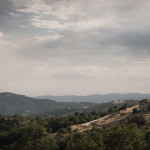 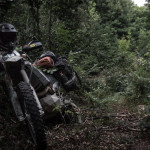 Day 20 on The Crimson Trail started a bit slowly. I had slept badly due to the constant pain in my arm. It was clear that it was in no better shape in the morning. I could barely use it. So i decided to take it easy for the day and try to stay on bigger roads. I found a route through the mountains and reconnected with the Crimson Trail. The scenery was incredibly beautiful, as was the riding. Just a perfect dual track across mountains and hills. It was steep at times and descents became especially tricky, as I had to ride them from the seat because I could not extend my right arm.

I finally with tarmac and pushed west. But the spirit of an adventure rider yearns into the hills and I could not take the monotonous tarmac any longer. Injured arm or not, I had to get to the trail. So I turned into the hills and followed a dirt track through small villages and beautiful scenery. I became very overgrown and a little technical, but I was doing ok thanks to painkillers. The arm seemed to be doing better once the muscles warmed up anyway.

It had been almost 5000 km so I stopped at a garage and asked if they would let me work on my bike. They had no objections and I soon had a group of young motorcycle enthusiasts helping me change the oil and filters on the 690. It was a fast pitstop and I was soon back on the trails- Unfortunately I had another flat tyre and again lost precious time before hitting tarmac and riding to the city of Prelip and another hotel night. 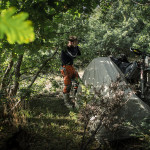 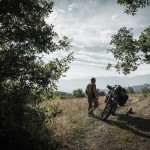 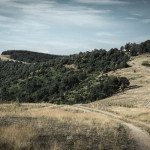 On day 21 on The Crimson Trail my arm was feeling a little better so I headed back into the mountains. Macedonia was incredibly scenic and I wanted to enjoy every minute of it, before crossing into Albania. The turning point came, when I was trying to gain access to a high mountain plateau, but it was not to be. All trail were either dead ends and the final effort ended up in a very dodgy looking footpath across a steep wall. I was not feeling brave enough to attempt riding it solo. So I turned the bike around and rode to Albania. Soon after the easy border crossing, I stopped at the first hotel. I was hesitant to park my bike at the side of the road so they let me park it in the hotel shop. Seemed like Albanians were very resourceful and friendly people. 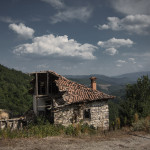 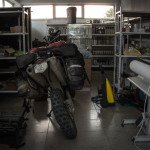