Day 12 on The Crimson Trail started with a nice and slow hotel morning. I was still somewhat off the trail, so I planned a route south from Vinnitsya to avoid having to ride tarmac to reconnect with the original route. I rode out at around noon and quickly made it out of the city and on to gravel. The route ended up being surprisingly good. Fast hard packed clay between fields. It always took a while to get into the swing of things, but after I warmed up, the pace quickened and progress was good. Before too soon I was getting close to the Moldovan border.

I had fallen head over heels in love with Ukraine and felt reluctant to leave. The riding was as superb as the people, the culture, the food and the general ambience of it. So I parked next to a field and sat there looking at the landscape, as farmers tirelessly worked to reap the fruits of the earth. I had found solace. Everything has a beginning and an end, and it was time to leave beautiful Ukraine behind. For now, until the next time.

The border crossing to Moldova went smoothly, but the mood in the border town was pretty grim. Pretty typical for those places I suppose. I left quickly as the skies darkened and rain started to fall, adding to the miserable first impression. The riding was nothing to write home about except for a few nice sections between fields. In the end I parked early on a derelict road between sunflower seeds and scouted my surroundings until nightfall and set up my tent in the cover of darkness. Sleep came instantly. 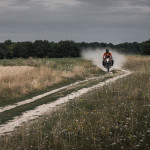 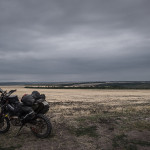 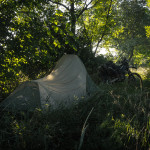 The morning of day 13 on The Crimson Trail washed away all first impressions. The sky was clear with the rising sun washing over the landscape. The trail became extremely enjoyable. Fast hard clay between fields, in an undulating landscape of rolling hills and valleys. Moldova was giving its best and I was sold.

After a hundred kilometres of riding, it was time to say goodbye to Moldova. I arrived at the Romanian border and crossed over without issues. The trail soon forked from the main road and it immediately became evident that Romania was spectacular. Hills grew higher and valleys deeper, as I pushed on towards the west. Just fantastic fast riding. As the route took me to the first forest section, I realised that it had just been foreplay and Romania meant business. The forest was covered with tracks, probably due to the bad condition of the main trail I was on. I took a wrong turn somewhere, and ended up riding a trail that washed out in the middle of nowhere, deep in the forest. I was only a few hundred meters off the trail, so I decided to cut across the forest, but soon realised that my way was barred by a small ravine. I managed to find a place to cross it but it was steep and keeping the front wheel on the ground while climbing was tricky work. Fortunately I made it out of the ravine without issue, but just as I hit the main trail, the 690 gave me its first ever engine temperature warning. It was the perfect spot to take a break, so I parked and both the bike and myself cooled off for half an hour before continuing.

The trail out of the forest was very tricky. I can’t remember where I’d found the trail but it had clearly not been in use for a long time. It was deeply rutted with rain water plummeting down the hillside, and baked completely hard in the sunshine. Progress was slow but I made it out in one piece. Luckily the trails widened and became nice and fast again. I ended up deciding to take a hotel night in the city of Roman and plan the next moves. 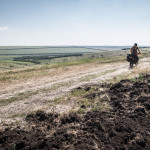 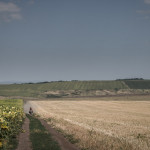 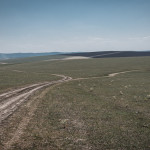 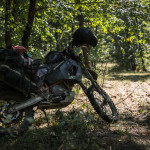 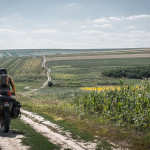 Day 14 on The Crimson Trail started as lazily as hotel mornings always do, but I was still pretty anxious to get on the trail as I would be hitting the Carpathians finally. Soon enough the mountains were silhouetted against a cloudless sky and I made my way up my route. The riding was more or less fast and easy, on hard and rocky logging roads. Riding up and down the mountains was a welcome change after the long flats of the North European Plain.

In addition to logging the area was used for oil drilling and riding past one of the pumps, the trail suddenly ended. Or actually there was a very ominous looking continuance in the form of a steep rutted trail down into the forested mountainside. It had clearly not been in use for a long while and was overgrown. For once I had an atypical moment of consideration. The trail looked perfectly rideable, but it would have been a long stretch completely off the grid and there was likely a reason for why it wasn’t being used. It could have of course become redundant, but landslides, water damage or just a large tree trunk across the trail would have meant backtracking back up and out of there. So I reluctantly turned the bike around and found another but less adventurous out.

The trail spat me into a village and I had to do a bit of tarmac to connect with The Crimson Trail. It continued on wide gravel and climbed gently up into the mountains. After the last village the trail deteriorated considerably and I found myself attacking a very rocky and steep climb through the forest of a mountainside. It was badly rutted with water flowing down the trail. I was wearing my tinted goggles so it seemed as if I was in complete darkness, under the cover of the overhanging trees. But suddenly the world was washed with light as I popped out of the forest and onto a spectacular col high in the mountains. It was a perfect moment with the sun low in the west and cattle grazing lazily on the short grass. I took in the scenery as adrenaline evaporated and my pulse slowed down after being on the offensive.

The continuance of the trail was the stuff of dreams. A grassy dual track over ridges, washed by the low sun. Instead of riding into the forest of the valley, I made a route change on the fly and opted to stay up in the ridges for as long as I could. It was much easier riding, despite some pretty steep sections. In the end I had an unavoidable forest section and I rode in hesitantly. The track had been used by heavy machinery and became deeply rutted with muddy wide puddles. Fortunately I managed to pass through them without getting stuck and soon after camped for the night. High in the hills, on short grass and sheltered from view, I enjoyed the last rays of the sun as it dipped behind a ridge in the west. 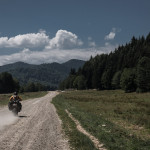 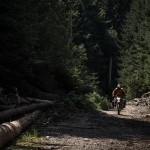 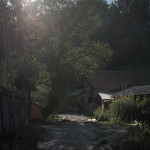 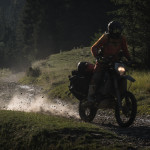 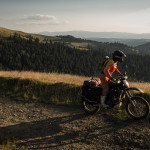 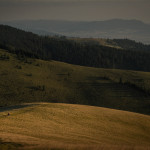